When football fans of a certain vintage get together and discuss the game, at some point airy conversation will crank down a gear into light grumbling when the subject of modern-day commercialisation of the sport arises. Megastores and merchandising may be all-pervasive these days as clubs seek to extract every last penny from supporters, yet it would be wrong to think this was some new-fangled horror spawned only in the post-Premiership and Champions League era. People have been trying to make money from spurious football tie-ins for as long as the game has been played.

With Christmas just around the corner, let BTLM take you back in time to look at some of the more tenuous football merchandise from the past – the sort of stuff you might have been waking up to open on Christmas morning half a century ago. We guarantee that after viewing some of this retro-tat, your heart will not be nearly so heavy when you buy that Wayne Rooney Toilet Roll Cover Doll that your Auntie Jean has been hankering after all year.

So it’s Christmas Day, circa 1968, and we’re going to imagine how your festive day might pan out as you try out all of those newly unwrapped football gifts from your loving family. Click on any of the images to enlarge.

Let’s start by trying on our new Rosette Tee Shirt by M.I.A.Products of London. Now we like t-shirts, we like football rosettes and we even like football rosettes pinned to t-shirts – but a t-shirt that sports a motif of a rosette? They’re casually turning a three-dimensional object into a two-dimensional one and only madness lies down the road when you start fiddling with dimensional order. BTLM reckons the badly crayoned character on the advert’s rosette might be George Best. Or Hattie Jacques. One of the two for sure.

Now suitably resplendent in our new Rosette t-shirt, it’s time to go outside and take some Xmas morning exercise. A perfect time to have a kick about with our new Seba Football, the one featuring an exciting montage print of a celebrity player of the day in action. The question we have is why these montages appear to have been painted by dark-era Goya? Bobby Charlton, Alan Ball and George Best appear transformed from ordinary human beings into tortured and disfigured souls from the Spanish Master’s Disasters of War series. Our tactic here would be to order a player on our Seba ball who was already so hideous that no artistic dark-arts by Seba Playball Division could render him any more unsightly. This is why on this cold and crisp Xmas morning, we’re happily kicking a Trifon Ivanov Seba ball around our garden.

We could do with something to kick that Seba football at, so it’s as good a time as any to give a first airing to our new Walley Barnes Football Practice Net. Nothing against the product as such, it just seemed a very odd endorsement choice. Walley Barnes had been a successful Arsenal player back in the 1940s and 50s, but his career was long over by the time this product was released. Besides; Barnes had been a full back and surely you would want a goalkeeper to endorse a product like this? It would be a bit like advertising referee whistles endorsed by Frannie Lee.

We can take a look at our new Pelé Watch to see how long we have been playing. Greatest player of all time or not, he didn’t half put his name to a lot of junk over the years. That watch face could be no more ugly if it featured fat, Sunday League players in action on Hackney Marshes. 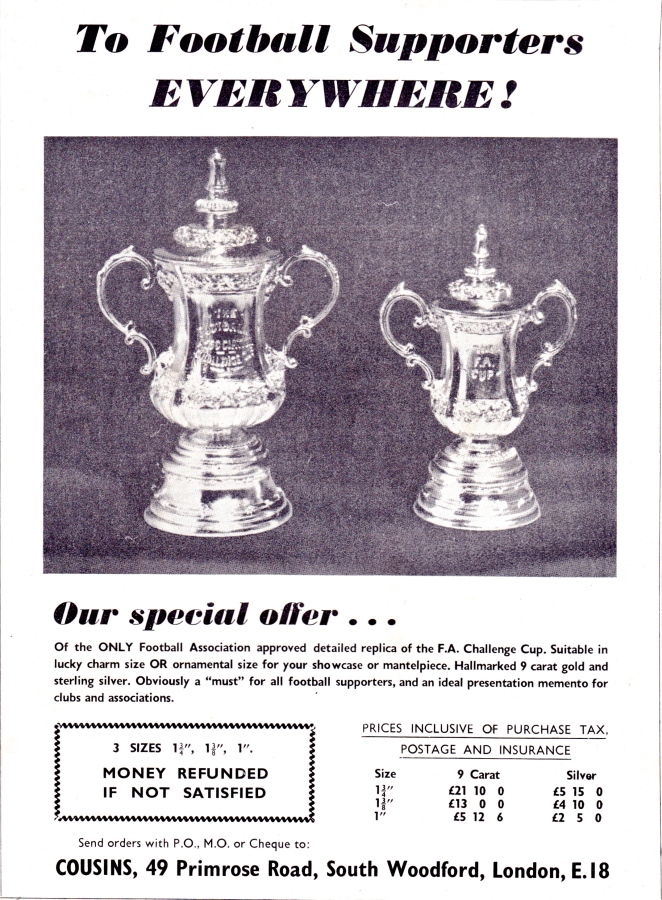 Deserving of some recognition for our sterling efforts after a vigorous kick-about, with suitable pomp and circumstance we will award ourselves a hallmarked, 9-carat gold (feel that quality) Miniature Replica FA Cup by Cousins of East London. Really, if you want bad replica trophies then get the plastic Subbuteo version instead. It looks about as realistic and is enormously cheaper than the eye-wateringly expensive £21 and 10 shilling price quoted here – roughly £315 in modern money.

Time for some liquid refreshment, perhaps a long, cold beer in our 12oz. Barrel Beer Glass by The Collectors Club. We can just about live with this, but the team colour-specific beer mats that go hand in hand with the glasses is an act of accessorising too far for us. 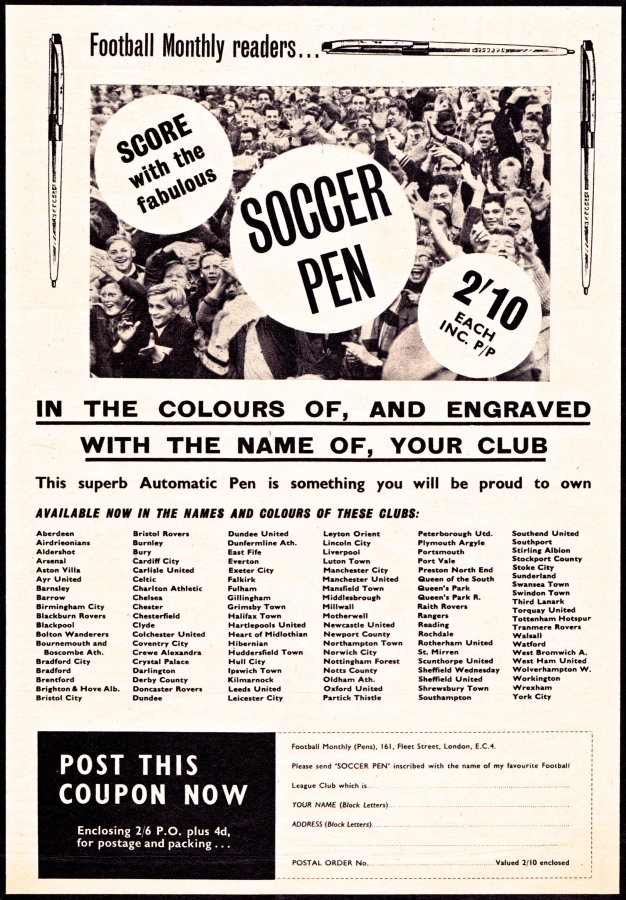 Time to write our thank you letters to everyone who gave us such a wide range of rubbish, retro football presents for Xmas. We would of course use our engraved and colourised Automatic Soccer Pen for this task. There’s a choice of over 100 English and Scottish clubs available and we want a Bournemouth & Boscombe Athletic one. We’re not a supporter or anything like that, we just want to make life as difficult as possible for their engraver. Any space-saving abbreviations and it’s getting sent back with a demand for a full refund.

All that’s left to do on this rewarding Xmas Day is sit in our armchair and gaze in bewildered awe at perhaps the most pointless piece of football merchandise we have ever seen – a Footballer in Bottle by The Scottish Shop. BTLM has never heard of anyone putting anything apart from ships in bottles before and it’s not as if there’s much point to that either. But hey, it’s a present and we will accept it in good grace, just as long as our Footballer In Bottle is Chelsea’s David Luiz and The Scottish Shop can get his head to nod when you shake it. Then, and only then, can it stay on the BTLM mantlepiece.