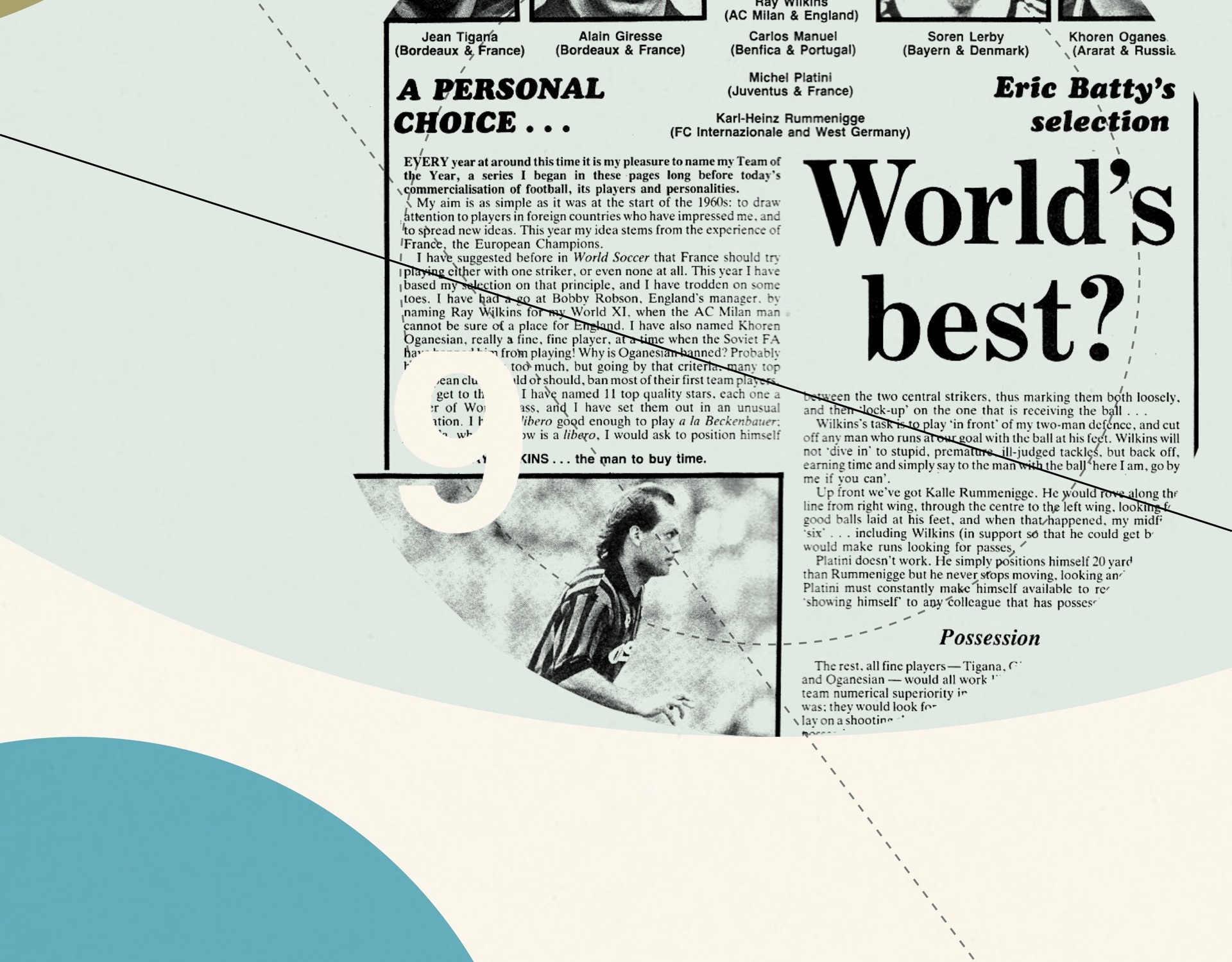 For those who grew up with World Soccer magazine in the 1970s and 80s, the earnest writing and headmasterly demeanour of its long-term editor Eric Batty will conjure up enduring memories. A prolific contributor over three decades, Eric was a proper footballing intellectual – a self-appointed tactical guru with a stock-in-trade of lengthy, baffling musings about formations and positional play of the day. 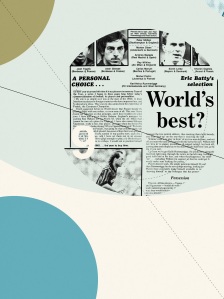 Eric’s best remembered and most accessible work was the annual unveiling of his World XI, a fictional team featuring his choice of the best players in each position over the previous 12 months. Lighter and less lecturing in tone than much of his work, these imaginary teams brought some much-needed whimsy and colour to Eric’s rather sombre footballing palette. He published 28 World XIs in total between 1960 and 1992 and they remain, to this day, a fascinating chronicle of both the huge evolution of the game over the period and the wonderful eccentricity of the writer. 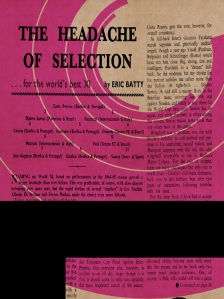 His personal heroes were Tommy Lawton and the Hungarian ‘Mighty Magyars’ who represented to him the loftiest of values that any player or team should aspire to; indeed, the merest, misty-eyed recollection of either was guaranteed to turn him all doe-eyed and avuncular. He was an unabashed footballing idealist: the Batty way was all about teams laden with skilled, attacking talent frantically trying to outscore equally cavalier opponents. Defenders were always the first line of attack and never the last line of defence.

Compared to the talent for passing and striding forward with the ball, strong tackling ability was a pleasant, if inessential frippery for Eric’s defensive players. In his own memorable and unusually bohemian phrasing, he declared that he “preferred football in a skilled and cultural groove.”  In homage to the great man, BTLM has duly appropriated this memorable line as our site’s strap-line. 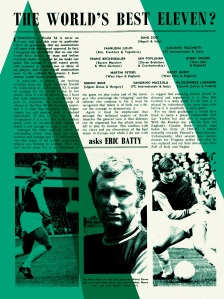 With such an abundance of extravagantly gifted footballers fitting the Batty mould, what better time was there than 1960 to start a World XI. Stellar individuals like Di Stefano, Gento, Puskas, Nilton Dos Santos and Pelé were in their pomp and much of a contemporary best of selection picked itself.

The problem for Eric was this footballing golden age was not long for the world. Coaches like Nereo Rocco and Helenio Herrera would soon ominously hove into view over the horizon, their unseemly regard for dogged defending, gamesmanship and modern formations causing consternation for an increasingly gloomy Mr Batty. His writing would take on a new forlorn air. Those diagrams sketching out his better future for the game became more oblique and his World XIs became another opportunity for him to rail against, what he saw as, a footballing end of days.

Eric’s selections displayed a discernible pattern of quirks. He was an unconscionable name dropper when it came to showing off his extensive knowledge of the furthest reaches of the world game. To a broadly English audience that didn’t know its Zenits from its Zeljeznicars, the World XIs would regularly teach us about obscure players, typically of Eastern European provenance, like Dimitar Yakimov, Anton Ondrus or Khoren Oganesian. Duly educated, we promptly forgot them all – ingrates that we were.

There was a tendency to go dramatically against the grain too; often a player of generally accepted world-class standing would be ostentatiously overlooked, then soundly chastised instead for his apparent shortcomings. His two biggest bêtes noires were Cruyff and Maradona: both were selected for just two World XIs each, and, when omitted, would be rapped on the knuckles for their tendency to drift out of games.

In 1974, Cruyff is scolded for his World Cup Final performance: – “He let down his colleagues atrociously” – and it’s not much better the following year when his season was bluntly labelled as: “pathetic.”  Despite almost single-handedly winning the World Cup for Argentina, this wasn’t enough for Maradona to make the 1986 World XI cut: “In my book too many stars today take little breaks, or in Maradona’s case long breaks; hiding among the masses in midfield, once their team is winning.”

So who actually did meet Eric’s exacting standards then? Which players were granted the status “by appointment to Eric Batty, good enough to entertain and demonstrate the noble art“? Franz Beckenbauer was plainly Eric’s favourite pupil and he was selected in defence or midfield for eleven World XIs in succession between 1966 and 76. Eric consistently praised his technique, vision and consistency and never found a bad word to say about him. Beckenbauer’s compatriot, Gerd Müller, managed 9 entries, Pelé earned 7 call-ups and Giacinto Facchetti achieved six. England and the Soviet Union dominated the goalkeeper nominations: Peter Shilton was named 6 times and Banks, Yashin and Dassayev were other regular keeper choices.

Other Batty favourites included Giresse, Platini, Rummenigge, Puskas and Mazzola (whereas Gianni Rivera was never selected). In terms of representation by nationality, well, the attacking flair of the Brazilians and the adaptability, reliability and organisation of West Germans were the two most prominent in his teams – both countries providing 39 entrants over the lifetime of the World XIs, comfortably ahead of the 28 from Italy, 26 from England and 25 from France. Twenty-nine different nationalities were featured in all. Bayern Munich, Real Madrid and Inter provided the most players, while Benfica had the notable achievement of supplying a record five players for a single World XI, in 1965.

What about oddities? In line with Eric’s erratic style, there were plenty. Ian Rush was the only Liverpool player ever to make a line-up. Denis Law was picked once, but neither George Best nor Bobby Charlton made the grade. Johan Neeskens didn’t either. Eusebio and Ruud Gullit managed just a single nomination and Ossie Ardiles was picked more often than Maradona. Scotland’s David Harvey was a curious keeper choice ahead of Sepp Maier in 1974, while in 1985, the Soviet-Armenian midfielder Khoren Oganesian was chosen despite serving a Soviet Federation imposed ban at the time for excessive drinking.

The set-up of his World XIs was just as important to Eric as the players he picked. He argued the value of the WM system, insisting on naming all of his World XIs in that formation until the end of the 1960s when finally, grudgingly, accepting that the rest of the world had long moved on. The 1980s did bring something of a Damascene tactical conversion. While still clinging to his core footballing principles, almost overnight Eric discarded many of the views he had clung to so adamantly over the years. It was quite a surprise for a man with a reputation for being so entrenched in his ways.

His World XI formations started lurching wildly, year-to-year, from odd to odder. The reader was introduced to formations that were previously unheard of and were guaranteed to remain that way (2-1-5-1-1 or 1-3-1-4-1 anyone?) Any trace of his beloved wingers was summarily excised when Eric belatedly recognised the death of the role in the modern game.

Further developing this line of thought, the new and dystopian wingerless-world made the defensive purpose of a full-back redundant. They now had no-one to mark, so they were purged too. Specialist full-backs were replaced by midfielders, actually whole World XIs seemed composed of midfielders complementing a stopper, sweeper and centre forward. Poor Alain Giresse might have found his career much more of a struggle had Eric been his manager. Selected five years running, the Frenchman was positioned in different years playing at left-back, on the right side of a three-man central defence, in central midfield and in the number ten role behind a striker.

‘Modern football is rubbish’ perhaps summarises a little simplistically Eric’s view on the evolution of the game, yet, it is easy to cast him in the role of a doctor who hoped his first-born son would follow him into the profession, only to see him become a new-age therapist. Consider the gloomy prediction he wrote alongside his 1984 World XI:  “In the future the game will be played by players who are so much better than those who make a living from the game today. If such players are not forthcoming, then inevitably the game will die as a spectator sport and regretfully, I have to say that at most clubs and in most countries, the game is already dying.”  Morbid stuff.

His quirks, wistful fascination for a faded golden age and earnest obstinacy aside, it is worth recognising that Eric Batty was an energetic and passionate – if left field – football visionary. Continually scathing about standards of coaching and professionalism in the British game, he advocated more cerebral coaches like Ron Greenwood as vital in encouraging the game to catch up with the rest of Europe. Only then could players be taught to treat tactics, training and physical preparation with the same gravitas as their foreign counterparts. 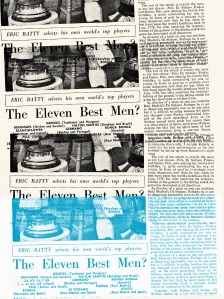 Tactically he often felt willfully out of step with his era, but in hindsight his approach can sometimes be viewed as innovative and progressive. It was rare for Eric ever to pick two centre forwards in a World XI; he preferred a single striker with two wide players, much as we consider an accepted standard today. Whilst we might think as perverse his suggestion to George Graham back in 1989 that “Arsenal should sell Dixon and Winterburn and play Paul Davies and Martin Hayes as fullbacks instead,” the broader point was that he was questioning football orthodoxy late in his life, in a way few other writers were.

He foresaw a day when “there would be a system when all players were artists and were capable of fulfilling any role for the team.” Even allowing for the developments made by the Dutch in the 1970s, his utopian vision felt fanciful in his heyday; decades later however, we see the contemporary Spanish game dominated by midfielders and innovating tactically, while playing without specialist players in traditional roles. Perhaps that new golden era that Eric argued was always just around the corner has indeed arrived.

Eric Batty died in 1994, but were he alive today then it is not much of a stretch to imagine him being uncharacteristically upbeat about naming a 2012 World XI. Such was the colourful and distinctive legacy he left, something would feel not quite right about his selection if, true to form, Andrés Iniesta wasn’t re-imagined at right back, Xavi as a left winger and Messi left out entirely in favour of a lower division, one-armed Moldovan forward who had caught Eric’s eye on a recent fact-finding trip to Chisinau.

Click the link for more articles about his World XIs in our Eric Batty series.