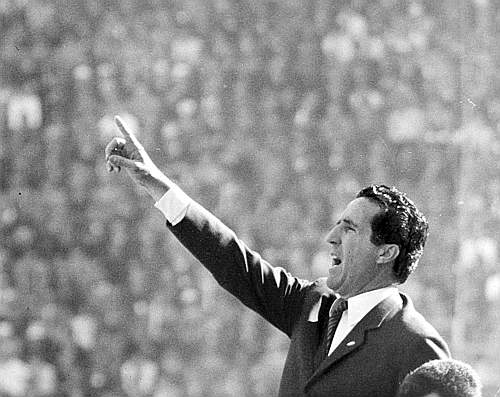 BTLM was thrilled to learn that Helenio Herrera released a record called the ‘Herrera cha-cha-chá‘ during his early managerial days in Italy. Tactician, icon, legend and now song and dance man too – was there no end to the great man’s talents? This one is a conceptually tricky idea to grasp though: Herrera’s stern, authoritarian demeanour didn’t readily suggest he could easily slip into loose-limbed crooner mode when he wanted a break from the daily grind of winning European Cups and bellowing mantras about sound defending loudly in the faces of his players.

It’s certainly very easy to forget that Helenio was actually born in Argentina, the country most associated with the tango. It’s historically known as the dance of smouldering passion and yet we know Herrera’s smouldering to be more of the barely contained fury kind. We don’t think any referees, players or journalists on the receiving end found it even a little bit sexy.

BTLM comes from a land that dances with swords and this might automatically disqualify our opinion, but we’ll venture one anyway. There is a certain, ordered, onomatopoeic structure to the cha-cha-chá which might have appealed to HH’s love of drilling and repetition; especially the part when big stashes of lire repeatedly cha-cha-ka-chinged their way into his bank account.

Opposition fans used to sing the ‘Herrera-cha-cha-chá’ ironically towards the bench during matches that Inter were losing, so perhaps it was the shame and the guilt of his alternative career that caused Herrera to change football history, adopt catenaccio and make sure Inter rarely lost under his stewardship. He just couldn’t handle the barbs about his stuttering delivery and limited chord range.

Despite concerted efforts to track down the offending piece of music, BTLM has failed to uncover it. If you can find any audio or video of Helenio singing this song, you will be doing our site a great musical service if you share it. We would be happy just knowing whether he even relaxed enough to undo a button on his sports jacket while performing it.

After literally 60 seconds of thought about even more unlikely combinations of serious football figures performing their national dance, BTLM conjured up the alarming image of a stony-faced João Havelange samba dancing on the front of a Rio carnival float, resplendent in crisp white shirt, tie and suit jacket up top and a too tight pair of Brazilian football shorts from the 70s down below.

See how long it takes you to shake that mental picture.