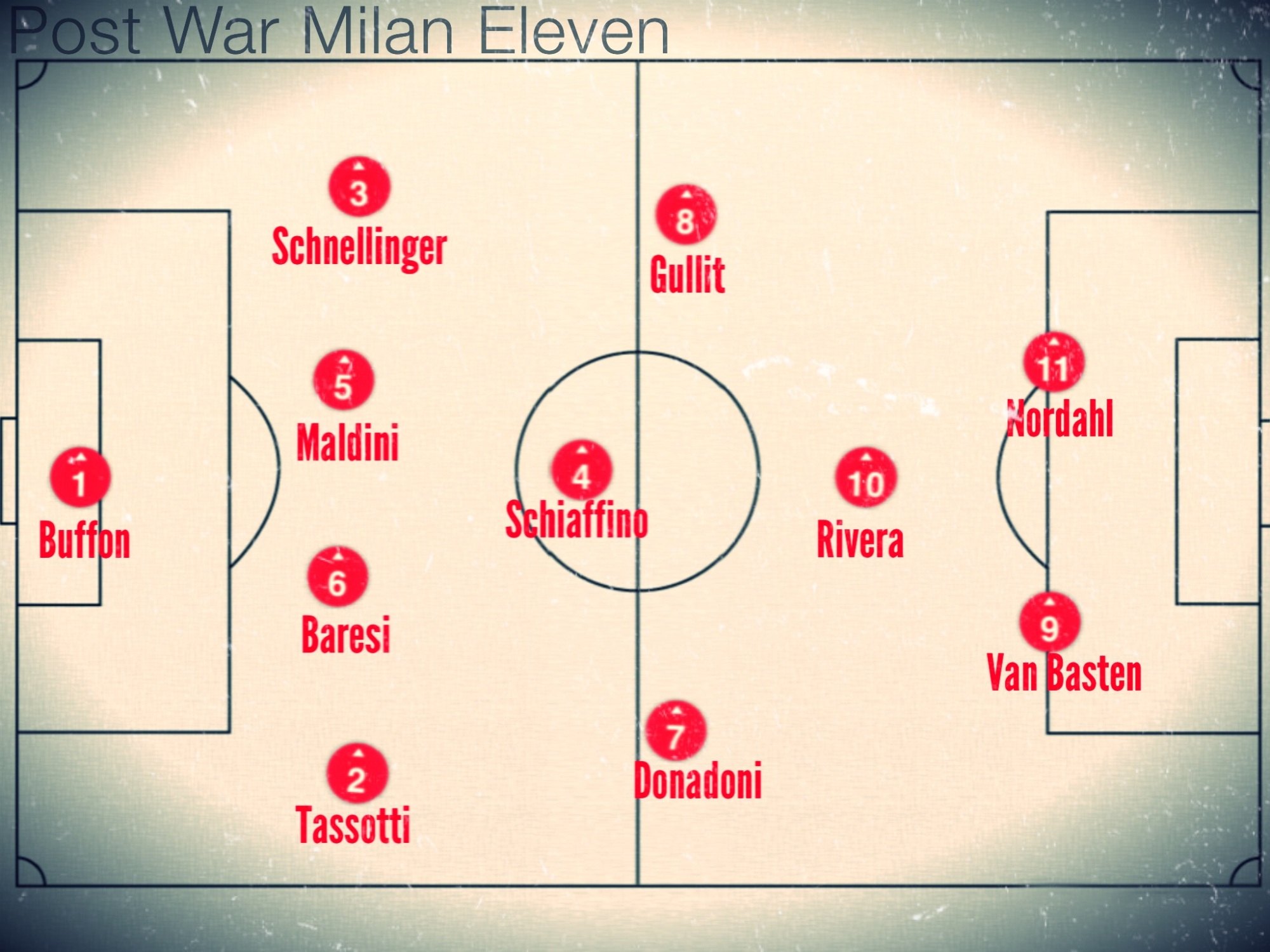 After covering Internazionale in our previous post, today’s follow-on Eleven selection features our best post-war line-up for their city neighbours at Milan.

It’s another illustrious group of footballers who amassed 4658 appearances and scored 714 goals for the rossoneri during their accumulated 139 years of service. A further 582 international caps were earned for their respective national teams – all totals lower than the equivalents for the Inter selection incidentally. Nereo Rocco would be our coach of choice for this wonderful fantasy side.

Read more about the histories of the players in our selection.

1. Lorenzo Buffon (1949-59, 277 apps, 15 caps for Italy)
Milan has never had quite the same goalkeeping heritage as their near neighbours and while some fine keepers have played for the rossoneri, often their career highlights came with other clubs. We’ve selected Lorenzo Buffon who was a successful mainstay for a decade and played a part in several championship successes – although even he would later win a Serie A title with Inter.

2. Mauro Tassotti (1980-97, 583 apps / 10 goals, 7 caps for Italy)
A tough and talented all-rounder from the great Sacchi-era team, the Roman-born player was a fine defender who was more than competent going forward too from his starting right-back position.

3. Karl-Heinz Schnellinger (1965-74, 334 apps / 3 goals, 47 caps for West Germany
Renowned for his mental strength as much as his considerable physical prowess, the West German international was one of the best left-backs in the world during the 1960s. Towards the end of his career he showed his adaptability and game intelligence when switching to the centre to play at sweeper.

4. Juan Schiaffino (1954-60, 171 apps / 60 goals, 21 caps for Uruguay & 4 for Italy)
Schiaffino was a revelation for Milan in Italian football just as he had been for Uruguay in their 1950 World Cup win. Nominally an elegant and technically gifted creative midfielder, the Uruguayan’s fine all-round game saw him contribute to fine effect in a variety of midfield and forward positions.

5. Paolo Maldini (1985-2009, 902 apps / 33 goals, 126 caps for Italy.
Undoubtedly Milan’s greatest-ever player and one who would have been an automatic selection in this team to play at left-back or in central defence. We plumped for the latter. Almost as remarkable as his fantastic talent and professionalism was the career longevity that saw him run up a top-flight Italian appearance record that’s unlikely ever to be matched.

6. Franco Baresi (1977-97, 719 apps / 33 goals, 82 caps for Italy)
Milan’s successes in the late 1980s and early 1990s just wouldn’t have been possible without sweeper Franco Baresi expertly marshalling his defence. His reading of the game, his mobility and his tactical intelligence mark him out as the best of the many great sweepers Italian football has produced.

7. Roberto Donadoni (1986-96 & 97-99, 390 apps / 23 goals, 63 caps for Italy)
Looking back at Roberto Donadoni a quarter of a century after he was at his playing peak, what is striking is just how modern a footballer he still looks today. A right-sided midfielder who could be anything you needed him to be: playmaker, winger, passer, dribbler, auxiliary defender or supporting attacker.

8. Ruud Gullit (1987-93 & 94-95, 166 apps / 55 goals, 66 caps for the Netherlands)
Selecting the Dutchman to play on the left side of midfield is not perhaps the most ideal role for him, but this was a player who did demonstrate incredible diversity and positional flexibility during his career after all. We couldn’t overlook his technique, his goals, his daunting physical power and the consummate game intelligence that would make him an asset whether you played him in defence, midfield or attack.

9. Marco Van Basten (1987-95, 201 apps / 124 goals, 58 caps for the Netherlands)
One of the greatest of modern attacking players, Van Basten was a striker with no noticeable weakness to his game, apart from the damaged ankle that prematurely brought his career to an end. Devastating on the ground or in the air, capable of scoring with both feet and blessed with an incredible sang froid when opportunities presented themselves; the Dutchman was a brutally clinical finisher.

10. Gianni Rivera (1960-79, 658 apps / 164 goals, 60 caps for Italy)
There are few more iconic fantasistas in Italian football history than Milan’s Gianni Rivera. A delight to watch in possession with his graceful movement and elegant flourishes, Rivera successfully unlocked many a packed Serie A defence during the years when Italian football was at its most defensive.

11. Gunnar Nordahl (1949-56, 257 apps / 210 goals, 33 caps for Sweden)
As a member of Milan’s famous Gre-No-Li trio of Swedes during the 1950s, Nordahl was the one who got the goals, and plenty of them. Only two players in Italian football history have scored more Serie A goals than this striking phenomena, and certainly none at anywhere near the same rate per game .