Some months back on BTLM we published a piece about the horrific death by electrocution of Luciano, the first of a two-part tale about the terrible tragedy that struck Benfica during the 1966-67 season. The old Portuguese saying about a misfortune never coming alone was all too sadly apposite as the club was further stung by a second dreadful player mishap, one that happened a matter of weeks after the Luciano tragedy.

On the 22nd of January 1967 a football festival was held around the country with matches played at eleven stadiums. It had been organised initially as a testimonial event for Vicente, the international Belenenses defender who had been forced to retire when he lost his right eye in a car accident, but on his insistence it became a shared day with half of the proceeds from the matches to go to Luciano’s widow. Large numbers of fans put aside rivalries to turn out and pay their respects to the pair, one fallen and one stricken.

It was a cathartic occasion for Benfica and after an emotionally draining day the club’s players were looking forward to flying to Chile to play a series of friendly matches. Included in the travelling squad was Augusto Silva, a right-sided defender who was on the fringes of the first team. On the second morning after arrival in Santiago the player woke in his hotel bedroom feeling disoriented. The right side of his body was numb and he could scratch his arm and not feel a thing. Thinking it would wear off, he got up and went through to the bathroom to prepare for training. Whilst in the shower, Augusto Silva suffered a massive stroke and collapsed on the bathroom floor.

There was some commonality between the careers of Augusto Silva and his late teammate Luciano. Both were of similar ages when struck down, – Augusto Silva was 27 and Luciano was 26 – both had impressed at smaller clubs before earning a big money move to Benfica and both had struggled to establish themselves at the Lisbon giants because of injury. Augusto Silva had started his career with Vitória de Guimarães where he had family connections through an uncle, Silva, who was the club’s long-serving goalkeeper. His position was nominally at right-back, but his athleticism and adaptability led to him being selected to play in an assortment of positions up and down the right flank.

His first team debut came in a friendly at 15 and his top division introduction followed in 1958, at the age of 19, with the newly promoted Vitória. It was a humbling experience on the wrong end of a 7-0 hammering by Benfica, but Vitória recovered well and finished the season in a commendable fifth place. Augusto Silva continued to develop and by the early 60s his performances were catching the eye of the big Portuguese clubs. In 1962 Porto attempted to negotiate a deal for him but just couldn’t match the package Benfica put together: a deal that included a large fee, two players in exchange and two others on loan. Augusto Silva made a scoring Benfica debut against his old club and ironically the game finished 7-0, again, to the Lisbon giants.

Whether through a traumatic personal life that saw two young sons lost to polio in quick succession, or a playing career that soon floundered; Augusto Silva’s time at Benfica was not a happy one. By the 1966-67 season he had spent four years with the Eagles but in only one of them had he managed to make appearances numbering in double figures. His career had been blighted by continual injuries and operations and this current campaign had been no different. The South American tour had been a chance for him to play some games, improve his fitness and try to force his way back into first team contention. 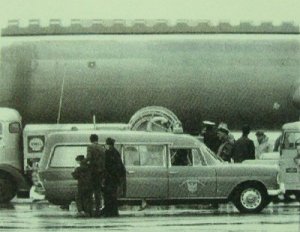 By good fortune Augusto Silva was found shortly after his collapse by his teammates Iauca and Camolas. He was rushed to a local Santiago hospital and took several days to emerge from his coma. The shattered Benfica squad flew back to Lisbon without their coach, Fernando Riera, who stayed in Santiago for a whole month until his stricken player was strong enough to return home too. By that stage he had made a partial recovery, but the damage the stroke had done was visible to everyone at the airport as he stepped off the plane and walked awkwardly across the runway to the waiting ambulance. Even after extensive physiotherapy, movement remained difficult and both his speech and the vision in his right eye were permanently impaired. There was no chance he could ever play football again.

In an era when clubs could often be brutal in the manner they discarded players who were no longer any use to them, both Benfica and Vitória did their best by him. His two former clubs played a testimonial match that he insisted on attending, physically difficult though it was for him, and Benfica kept him on the payroll at the Estádio da Luz employed in various administrative positions in the club’s offices.

Benfica reclaimed their Portuguese title in 1967 but there was nothing to celebrate in a season the club was just glad to see the back of. In football there will always be players who have careers cut short in their prime because of injury, yet still have the majority of their lives ahead of them to find a new vocation and a renewed purpose. This was something quite different. In an eight-week spell two young professional athletes in their peak years lost much, much more than merely their football careers. Luciano’s life was over and Augusto Silva’s remaining life would be spent as a mere shell of the man and the footballer he had once been.