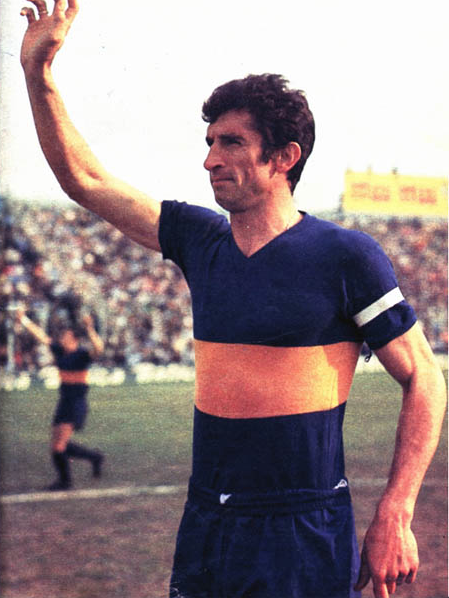 Thanks to that notorious sending off during the ill-tempered 1966 World Cup Quarter Final against England, Antonio Ubaldo Rattín will be forever immortalised as the public face of Argentina’s snarling and attritional late 1960s style. Which is a little unfair.

Rattín was no rent-a-thug bully like many of the low on quality, high on intimidation defenders that emerged from Argentina during that era. The long-serving Boca Juniors mainstay was a fine player and a number five in the classic Argentinian tradition: a powerful and influential deep-lying midfielder who broke up opponents’ moves and initiated Boca’s attacks in a composed, no-nonsense manner.

His dismissal in that particular game was not for violent play, rather for continual protestations to a referee who could not understand a word he was saying. The whole unfortunate incident was more a reflection of growing cultural differences between Europe and South America with regards to what did and did not constitute acceptable player practice. 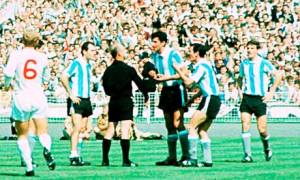 Talented footballer as he was and unfortunate as he might have been at Wembley that July afternoon, this is not to say that Rattín was totally averse to using the black arts when it suited him. Some years after his retiral he spoke to El Gráfico magazine about the 1963 Copa de Libertadores Final in which the Boca Juniors team he captained was involved.

Boca could boast a strong team that year with an especially potent attack featuring the prolific José Sanfilippo playing alongside the Brazilian forward, Paulo Valentim. But their opponents would be the mighty Santos with their dazzling line-up of stars that included Pelé, Lima, Coutinho, Zito, Gilmar, Pepe and Mengálvio. The Brazilians were reigning South American and World Club champions and their reputation had gravitated to a level in which they superseded even Real Madrid as global icons of improbable skill and exotic glamour.

Boca’s players and management accepted that Santos were strong favourites to win, but Rattín and coach Aristóbulo Deambrossi disagreed strongly about the approach the Argentinian side should adopt to try to negate this advantage. Deambrossi wanted to play an open game to bring his talented front pairing into play as much as possible, but his captain had something a whole lot more cynical in mind. In a statement that demonstrated a contrary mix of self-effacement, self-sacrifice for the greater good and utter shamelessness, Rattín explained how he thought Boca could prosper.

“I had the perfect tactics worked out but he refused point-blank to have anything to do with them. I was going to provoke Pelé right from the start and get us both sent off. Boca wouldn’t have missed me very much, but Santos wouldn’t have played half as well without Pelé.”

Boca gave a good account of themselves despite losing the Final as expected. José Sanfilippo scored all three of their goals over the two games justifying his coach’s positive approach to some extent, but it was Pelé’s commanding performances that decided the tie in Santos’s favour. We’ll never know if Rattín’s drastic proposal might have turned the tie in Boca’s favour, but at the very least his weapons-grade level of cynicism deserves to be recognised. And the football kamikaze tactic where a player sacrifices himself to take out a more influential opponent must surely be overdue a modern revival.