David overcomes Goliath in a Cup Final, deservedly, with a late and well-taken winning goal. In the autumn of his career, the captain of the underdogs climbs the steps to lift the trophy having played a significant role in the defeat of the very club with whom he had been a much-decorated legend earlier in his playing days. While such a compelling narrative is typically the hallmark of a classic Cup Final, appearances can sometimes be very deceptive – this is, good God, the Scottish League Cup Final of 1973, a compendium of every single adverse element the 1970s Scottish Football Experience had to offer and brutally distilled into 90 miserable minutes. 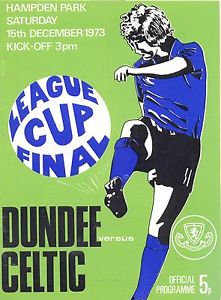 An unfancied Dundee led by ex-Lisbon Lion Tommy Gemmell defeating mighty Celtic 1-0 was almost superfluous detail. This was a terrible game at the climax of a moribund tournament, played in appalling weather at a derelict stadium during a national fuel crisis in front of a paltry and apathetic crowd. It’s no surprise the attendance for this game was by some measure the smallest Hampden had ever seen for a major Final.

The reason these two teams wearily trudged to Hampden Park on that foul December day in 1973 depends upon which perspective you prefer: to decide that season’s League Cup competition and win the first major silverware of the season, or just to get that infernal tournament out the way for another year. By 1973 the League Cup was a bloated dog’s dinner of a competition stumbling blindly towards utter irrelevance. With group stages, knock-out matches, one-off games, replays and random supplementary rounds; the format was a perplexingly complex and long-winded attempt to brazenly extract as much gate money from gullible punters as possible .

Even the most faithful of fans had their loyalty tested to breaking point if their team advanced far into the competition. Take Celtic. By the time the final whistle blew at Hampden the Parkhead side had ground their way through 13 League Cup fixtures in just three months, including three Old Firm derbies. This was a ludicrous number when the European Cup could be won in nine games and the Scottish Cup in just six.

A sensible streamlining of the competition would take another decade to arrive, so the blazers at the Scottish League preferred a minor sop towards experimentation in an attempt to inject some vim into their ailing tournament. For League Cup games only a law that extended the offside line to 18 yards was introduced. To be fair this change did add another dimension to the competition: fans had moaned about the competition being boring, now they complained it was boring and confusing.

But now that Celtic had navigated their way past all of those meaningless games and stood just 90 minutes from silverware, this would surely inspire their supporters to turn out in force at Hampden? Not a chance. Overfamiliarity, apathy and a faint degree of suspicion dictated the terms of Celtic fans’ awkward relationship with Scotland’s second national cup competition. This 1973 game would be Celtic’s tenth successive League Cup Final appearance and if winning five of those first six had been intoxicating, the three successive defeats in recent years – and especially the sobering 4-1 humiliation by Partick Thistle in 1971 – had been a stringent enema to the system. With bigger fish to fry in League and European Cup, the League Cup was being seen by the Celtic-minded as a banana skin waiting to be trodden on and make them look foolish. 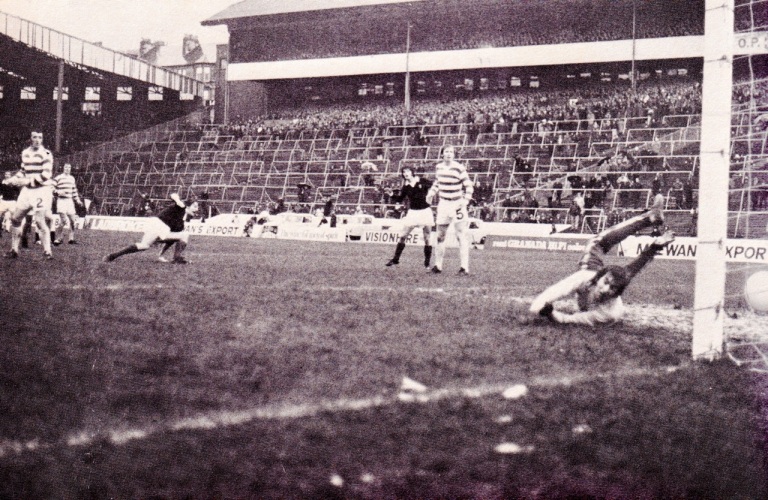 Another grim backdrop to this game was the national fuel crisis gripping the nation during that winter. To minimise electricity use the government had banned the external generators that football clubs utilised to power floodlights. These were troubled and strife-ridden times, but the strong voices in the media calling for the Final to be delayed until later in the season would be ignored. The compromise was an earlier 1.30pm kick-off to ensure that the game could be completed before darkness set in, an optimistic notion considering Glasgow is a city where natural light barely breaks through the leaden pall at all during the winter months. The unusual dim and eery half-light the game was played in is captured well in the televised footage (included at the end of this article).

And then there was Hampden Park. On a sunny day in May with flags fluttering against the gentle blue sky of a pleasant Scottish spring afternoon, you might just about be able to see past the many problems that blighted Scotland’s grim and decaying national stadium. But for the rest of the year a visit there offered all the welcoming charm of a visit to a gigantic outdoor toilet.

After gingerly inspecting the pitch the respective managers Jock Stein and Davie White radiated little in the way of goodwill either. The Hampden turf managed to combine the worst of all worlds: bone-hard underneath from outdoor temperatures that had barely risen above freezing point all week, and a cloying, muddy layer on top from the continuous sleet that fell all day. Both declared it unplayable while expressing their concern for spectator safety on the slippy and snowbound terraces.

The safety aspect at least wasn’t problematic with the stadium only a quarter full. Fewer than 28,000 brave souls turned out that day to sullenly stand huddled together in pockets on the exposed terraces of the cavernous ground. Curious neutrals who might have been tempted to attend the game – had they suffered a temporary breakdown of their critical faculties – had the alternative of a full League programme taking place simultaneously around the country. Or better still, staying at home.

And so to the game itself, for what it was worth. With Celtic firm 2/1 on favourites with the bookmakers, Dundee’s Tommy Gemmell suggested beforehand that it would be ‘Snow White & The Seven Dwarfs stuff if Dundee were to win’. Surprisingly it was the Tayside club that adapted better to the conditions and managed to put together some decent one-touch football. By contrast Celtic unsuccessfully tried to take advantage of the experimental offside rule change by missing out midfield with long balls to Dalglish, Wilson and Hood.

John Duncan shot over the bar in the fifth minute and ten minutes later Danny McGrain cleared a Gordon Wallace effort off the line with keeper Ally Hunter stranded. Dundee should have had a first-half penalty when the ball struck Brogan’s arm. It was early in the second-half before Celtic had their first real chance when Dalglish shot straight into the arms of Dundee keeper Thomson Allan. With the afternoon darkening and standing water amassing on the pitch further reducing the game to a farce, the horrible prospect of another half an hour of this debacle was thankfully averted. Gordon Wallace beat the Celtic defence to a free kick, brought down the ball with his back to goal, turned and swept a shot past Ally Hunter. Sub Jimmy Johnstone came close to an equaliser late on but Dundee held out for a deserved win.

To this day the 1973 League Cup Final represents something of a nadir in Scottish football history. As if the potent combination of administrative incompetence, footballing apathy, infrastructure neglect and the vagaries of the Scottish weather weren’t enough; unusual and never to be repeated external factors added another dimension of dreadfulness to this utter non-event.

It had been a universally recognised notion that in football a Cup Final represented something special, something distinct; something that set it apart from other games and made it into an occasion of note. The Scottish League Cup Final of 1973 single-handedly came close to demolishing this accepted wisdom for good.