Bolton Wanderers and West Ham United. One of the more unusual aspects of the 1923 FA Cup Final is how few people remember the teams that contested the Final that year. On no other occasion in its long and illustrious history has the FA’s showpiece event been more about what happened off the pitch than on it.

This match was the first to be played at the newly constructed Wembley Stadium and, ironically, the FA had concerns it would be unable to fill the new ground’s huge 125,000 capacity. Those doubts were misplaced. A combination of public curiosity about the new venue, an extensive advertising campaign, good public transport links and a London team participating in the Final meant interest in the occasion would be unprecedented.

Wembley was full hours before kick off, but dangerous congestion outside the turnstiles caused many thousands of supporters to climb over the now locked gates and into the packed stadium. It’s estimated that any number between 200,000 and 300,000 fans gained admission making this probably the biggest unofficial attendance in world football history.

The match finally started 45 minutes late after the intervention of mounted police to clear fans who had overflowed right to the edge of the pitch. One of the police horses was named Billie and her distinctive white colour ensured she would be remembered as the visual icon of that day. Ninety years later the 1923 FA Cup Final is still known as the White Horse Final. This Vintage post visually recreates the madness of that day in some sort of chronological order.

Fans queue at the turnstiles to gain admission to Wembley

An aerial view shows the vast crowd inside the stadium 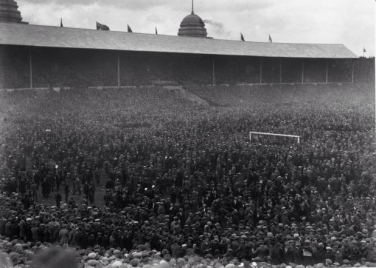 An oil on canvas painting of the day by Reginald Brown

Fans pushed back behind the goal lines

Billie, the equine hero of the hour