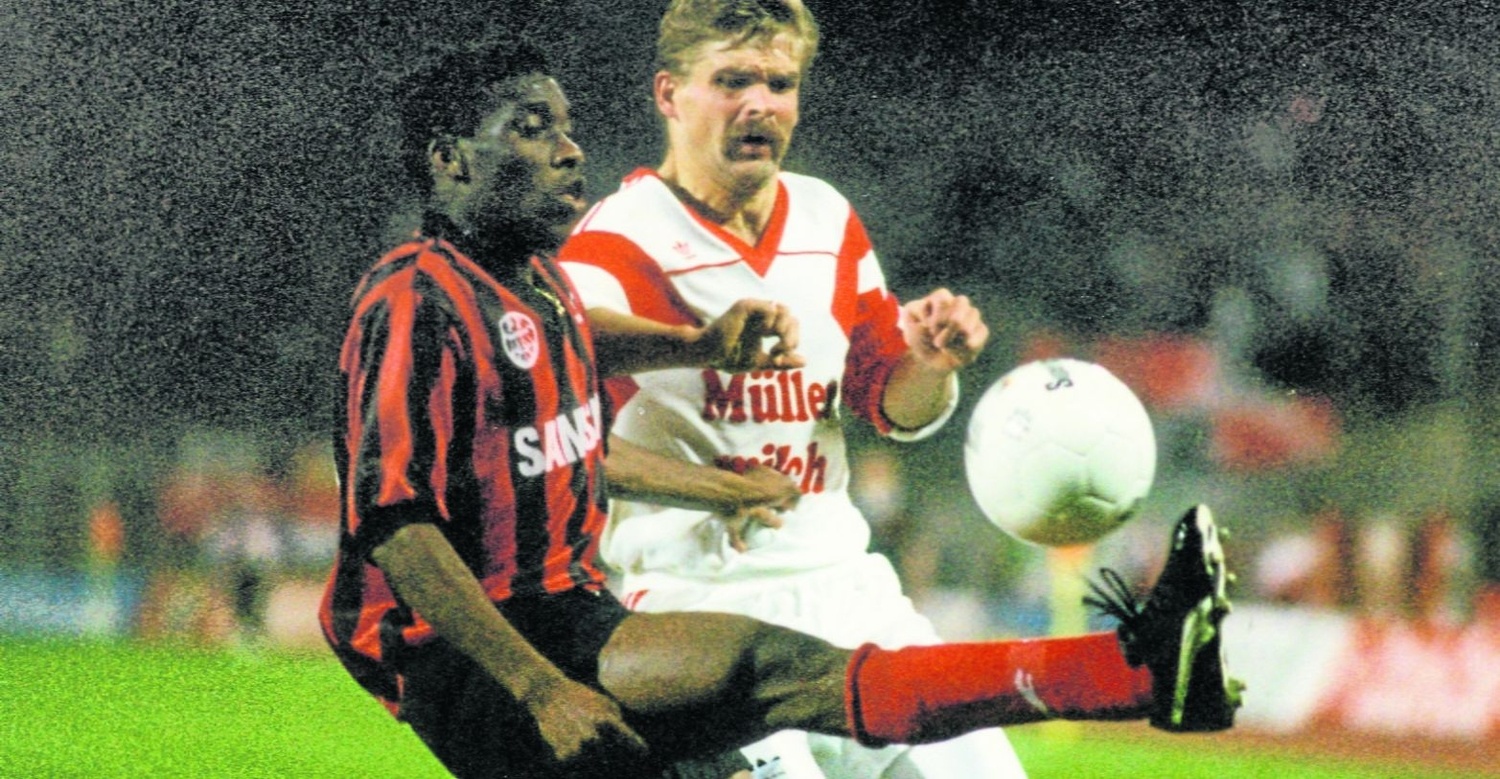 After a two-decade Polish absence from the group stages of the Champions League, Legia Warsaw’s qualification this season was meant to herald something of a renaissance for the Polish game’s battered reputation. Unfortunately that initial euphoria wore off just as soon as the action began with Legia on the wrong end of a 6-0 opening round hammering by Borussia Dortmund.

This might have been Legia’s biggest-ever European defeat, but it’s a long way from being the worst suffered by a Polish club. That distinction belongs to Widzew Łódź, crushed 9-0 in a UEFA Cup tie at Eintracht Frankfurt 24 years ago. We welcome Maciej Słomiński to BTLM to tell us the tale of a sobering evening for Polish football.

The city of Łódź is sometimes called the Polish Manchester due to its textile heritage. It’s by no stretch of the imagination a pretty city and it’s perhaps no surprise that the film maker David Lynch chose it as the location to shoot ‘Inland Empire’, a movie which is very weird even by maestro’s standards. Widzew itself is a nondescript district of the city and is famous for little apart from its impressive football team back in the days when the club was a force to be reckoned with in Europe.

English fans in particular might remember them from their late 70s and early 80s heyday when Liverpool and both Manchester clubs fell to the team whose ascent to prominence ran in parallel with the rise of their midfield genius Zbigniew Boniek.

This was no one-man team though and Widzew could boast a smattering of other Polish internationals like Smolarek and Młynarczyk in their side. The quality was unquestionable and the sum of the team’s parts was greater than the individual components thanks to Widzew’s fighting spirit ethos and hard work, reflecting its original roots as a Workers Sporting Association. Boniek moved on to fame and fortune in Serie A and Widzew’s fortunes gently waned as Poland lurched towards the end of its communist era. A final European campaign came in 1986 and ended tamely with defeat in the early rounds to Bayer Uerdingen.

Seismic political changes began in Poland in February 1989 resulting in semi-free elections on June 4th. The election result saw a landslide victory for the Solidarność party, meaning the end of communism in Poland and the eventual disbandment of the Warsaw Pact. In sporting terms it meant football clubs lost their patronage and were no longer financed by the army, police, mines, railway firms and state textile companies that had propped up the system previously.

At Widzew it meant the legendary chairman Ludwik Sobolewski, a man as famous for his ability to source hard-to-attain Western goods as talented players for his club, was still in situ but now pulling the strings was Andrzej Grajewski. A boyhood Widzew fan, Grajewski travelled to European games during the communist years and gained cult legend status as the only away fan in attendance when Widzew played a UEFA Cup fixture in Saint-Etienne in 1979.

He left soon after for West Germany, started calling himself Andreas and worked as a butcher, then sold flowers before moving on to used cars. When the Wall came down he began representing German diary giant Mullermilch in Poland which brought him back to Łódź, though now as owner at a transitional and very wild time for Polish football.

Grajewski had to contend with a surprise Widzew relegation from the Polish top-flight in 1990, although exile from the top division proved brief. The club returned within a season and a third-placed finish in their first year back qualified them for the following season’s UEFA Cup.

In the opening round Widzew drew an Eintracht Frankfurt side that had lost the German title on the final day of the previous season. I was well aware of their power as a satellite dish was installed where I lived then, meaning the people in my block of flats were able to watch four western channels. At this time some people in certain parts of Poland were more familiar with the Bundesliga than their own domestic league!

The first leg was played in Łódź (at the Widzew ground instead of ŁKS where all the glorious European nights had happened in the past) and the home side put together a two-goal lead in the first half while missing several great chances to score more. It was a good game between two sides who were unbeaten at the time in their respective leagues.

Eintracht recovered in the second half to come away with a 2-2 draw. Despite disappointment in the Polish media those familiar with the Bundesliga like me were happy with the result as Serb coach Dragoslav Stepanovic’s Frankfurt team was a strong attacking side – Tony Yeboah, Jay-Jay Okocha, Uwe Bein, Ralf Weber and Axel Kruse offered goal threat while the experienced Uli Stein, Uwe Bindewald and Manfred Binz shored things up at the back. No-one expected quite what would happen in the second leg however.

The day didn’t start badly. When the Widzew party arrived at the stadium midfielder Leszek Iwanicki asked coach Władysław Żmuda (the same name but not the famous international who played in four World Cups).

This was good news as Bein was the Poles’ most feared opponent – a talented left-footed number 10 and World Cup winner a couple of years earlier. As it was, Bein came on as a sub after half an hour and scored the last goal of the game. It was Frankfurt’s ninth…

Despite a sparse crowd of only around 11,000 fans at the Waldstadion, the home side was focused and professional and treated the game very seriously. Their strikers Axel Kruse and Anthony Yeboah undertook a personal duel to see who could complete the quickest hat-trick with the Ghanaian winning narrowly – he took 36 minutes and Kruse took 38 – as Frankfurt roared into a six goal first-half lead. It was a nightmare. The break is short but you could have filmed a movie based on that quarter of an hour.

Andrzej Grajewski entered the dressing-room in a positive mood

“Lads, we only trail by six goals, we could still do it, heads up!”

Midfielder Paweł Miąszkiewicz had even less luck. He was on the bench and while he was supposed to be warming up during the interval he tried to disconnect TV cables so people back home wouldn’t see what was going on. He failed and broke some other device. Defender Tomasz Łapiński who just won a silver medal at the Barcelona Olympics said to Marek Koniarek (the top scorer in Widzew’s history) – “You know a bit of German (Koniarek had played previously with Rot-Weiss Essen), beg them to stop” Łapiński tried but Frankfurt’s players paid no heed.

“I was praying they wouldn’t score ten! After each goal a giant rooster appeared on the scoreboard and long after that I had nightmares of it crowing. When we landed back in Warsaw, taxi drivers made fun of us – why don’t you change the Łódź telephone directory number to 09? We had the last laugh as we beat Legia 2:0 just couple of days after the Frankfurt humiliation.”

After the game Koniarek’s team-mates told him – at least you had nine touches of the ball, as you kicked-off after each goal. You’re wrong – Koniarek yelled at them. I had ten as we also started the game.

On their return trip Widzew’s players bumped into their counterparts from Miedź Legnica, the previous season’s cup winners, at the airport. They politely asked the players from the second division side how they had fared in their European tie in Monaco and couldn’t believe Miedź had managed a draw with Arsene Wenger’s respected side.

Twenty four years later this remains the worst defeat in the history of Poland’s involvement in European competition, though there will likely be a few Widzew fans quietly hoping that Legia Warsaw might just take their unwanted record this season with daunting away fixtures in Dortmund and Madrid to come.

Maciej Słomiński was born in 1978 in Gdańsk and attended his first Lechia Gdańsk game in 1985. He has had articles published in The Guardian, When Saturday Comes and numerous Polish newspapers and periodicals like Rzeczpospolita, Fakt, the Lechia Gdańsk matchday magazine and various websites including Futbolnet, Weszło, Footbar and Slowfoot.

Maciej lives in Sopot on the Baltic Coast with his wife and four kids, works for a bank and claims Mexico`86 as his favourite World Cup.