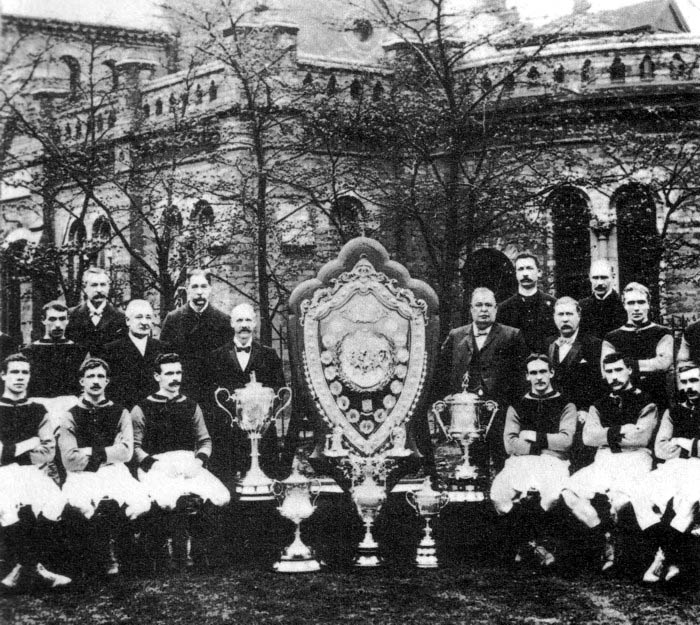 A forerunner to the annual Charity Shield match, the Sheriff of London Charity Shield was contested between 1898 and 1907 as a season curtain raiser between the best amateur and professional clubs in England. A nod is due to Queen’s Park, those regular Scottish interlopers in English competitions who competed for and shared the 1899 edition with Aston Villa.

The professional game was represented each year by the League champions or sometimes the FA Cup winners, whereas the choice of amateur representative was uniformly the Corinthians club – this in the days before the merger that saw them become Corinthian Casuals in 1939.

It would be fair to say that the main talking point was the actual shield itself rather than the competition format or some of the eventful Finals (like the 1904 edition in which Corinthians hammered Bury 10-3). The shield was commissioned by the then Sheriff of London John Dewar and remains to this day the largest trophy ever competed for in football. It stood six-foot tall and attempting to lift the thing would have been akin to lifting a family wardrobe. The images that exist show this colossal edifice dwarfing the players posing victoriously beside it.

The shield was mothballed, probably in an aircraft hangar somewhere, when the Charity Shield as we know it today began in 1908 with a new, smaller and considerably less ostentatious trophy. It was brought out for fundraising purposes intermittently over the next 80 or so years – three times in the 1930s, three times in the 1960s and finally in 1983 when Graham Taylor’s Watford crushed those ever-present Casuals 6-1.

The trophy was put up for auction by the Casuals a decade later and raised £25,000 towards the financing of an all-weather pitch for the club.