Crowd violence is not a modern thing. Neither are money-spinning tours of the USA by European clubs. Back in the 1940’s, a champion team from Northern Ireland were heavily involved in both. Belfast, December 1948. A top of the table clash between Linfield and Belfast Celtic in the Irish League finished 1-1 at Windsor Park in front of a 30,000 strong crowd. As referee Norman Boal signalled the end of the encounter, scores of Linfield supporters descended onto the pitch from the Spion Kop stand. Within seconds, the occasion was marred by violence. Pockets of the Linfield support proceeded to attack Celtic players leaving the likes of Kevin McAlinden and Robin Lawler to receive lengthy hospital treatment.

As Celtic striker Jimmy Jones made his way to the tunnel, the 20-year-old was set upon by a section of the baying mob. Despite having a stocky build, the Lurgan native was thrown around ‘like a rag doll’ where he was helplessly beaten and kicked to the ground by a crowd of 30. The savage attack left the defenceless Jones bloody, unconscious and with his leg seemingly destroyed. He was eventually rescued by his team mates before the unthinkable could happen.

While crowd violence at football was not uncommon in the late 1940s, indeed this was not the first occasion that hooliganism had reared its ugly head in a match involving Belfast Celtic, the savage scenes in Belfast made grisly front page news; even across the Irish Sea. Newspapers in Scotland and England reported on the total lack of activity of a multi-million pound police force, equipped to preserve the law, which stood idly by and allowed striker Jones to be mauled. One police officer was also reported to have scandalously remarked that if the gentlemen beating Jones senseless did not stop, he might have to resort to using his baton on them.

The unsavoury events that occurred at the end of the match were discussed at length in the Ulster Parliament of the time. It was agreed that the incident at Windsor Park had brought ‘shame and disgrace on the city of Belfast’ and where, extraordinarily, the MP for Willowfield was accused of helping orchestrate the violence, as well as engaging in sectarian chanting. But it was the police who received widespread criticism in the house for ‘refusing to take immediate action when a life was in danger,’ according to one MP.

Extreme instances of violence were nothing new to Belfast Celtic, though. In 1920, an Irish Cup semi-final clash against Glentoran descended into a riot where pistol shots were fired by Celtic supporters. After both teams were ejected from the competition, Celtic also chose to withdraw their IFA membership completely and did not return to Irish League football until the beginning of the 1924/25 season. Nevertheless, the scenes that followed the final whistle at Windsor Park shocked the club and footballing community in Ulster to the core. The Irish News’ regular football columnist Ben Madigan, at the time wrote: “Looking back down the years I can’t find even a remote parallel to the shocking spectacle at the finish – with regards to Jones – the unthinkable could have happened.”

At Celtic’s following home fixture, the club made no further comment on the scenes in the match day programme beyond the statement: “The directors consider that until they have decided on the future of the club, further comment would be injudicious.”

On 4th January, the Irish Football Association met to discuss the events of Celtic’s game with Linfield that took place on 27th December. The IFA made the decision to close Windsor Park for one month, meaning Linfield’s home fixtures against Ballymena United and Glentoran were switched to away games with immediate effect.

While Belfast Celtic did feel the punishment unjust, the main concern of the club’s directors was the apparent worrying lack of police action taken against Linfield supporters and the continued safety of the club’s players.

Although their decision was not made public, the directors decided that they would withdraw Belfast Celtic’s membership from the Irish League at the end of the 1948/49 season. This decision would have been unthinkable at the beginning of the campaign for a club that had won 11 league championships in the past 22 seasons; not to mention four regional league titles during the Second World War.

As the season rolled on, the club’s final fixture in Northern Irish league football approached. On the same day that the Yangtze Incident of April 1949 made front page of the Irish News, the paper also conveyed a bittersweet sentiment with regards to Elisha Scott’s side. While there was a sombre tone after Celtic’s farewell game in the Irish League, optimism and excitement was apparent ahead of the club’s tour of North America and plans of a grand welcome in New York.

Although overseas tours were not uncommon in the late 1940s; indeed, Arsenal were touring Brazil around the same time, Belfast Celtic were somewhat pioneers of the Irish League when it came to touring abroad. Before the UEFA European club competitions, the Hoops had travelled the European continent with matches in Scandinavia and Czechoslovakia. No other Irish League club had toured on the same scale as Celtic, let alone to a different continent.

Before the side had set sail on the ocean liner RMS Mauretania from Ireland’s southern tip in Cobh, advance tickets for Celtic’s first match of their ten game tour was reported to be the largest on record for an overseas team in New York. On 10th May, New York based journalist, Shane Conway wrote: “With the coming of Belfast Celtic, idol of soccer fans, and father knickerbocker (the symbolical sobriquet for this metropolitan municipality) gave the famous team a right royal welcome on arrival.”

The whole side, with the exception of star striker Jimmy Jones, still recovering from his horrendous ordeal, were received by Mayor William O’Dwyer in front of a jubilant crowd in New York City. Many of its citizens, particularly those with Irish heritage, took to the team immediately and the players needed a police escort to keep the excited fans at bay as they were given a tour down Broadway. Furthermore, while in Canada, the Toronto Star commented that, “even though English and Scots teams had come in the past we have not seen a team capture the imagination of the people like Belfast Celtic.”

Celtic opened their tour with a 2-2 draw against the American All-Star Soccer League Team, dubbed as an amalgamation of the East Coast’s finest, in front of a capacity crowd at New York’s Randall Island before defeating Brooklyn-Hispano. However, it was their fixture against the Scottish National Team that would really capture the imagination of supporters and that would forever go down in football folklore.

A confident Scotland outfit entered their respective American tour on the back of sealing the British Home Championships at Wembley with a 3-1 over England, as well as possessing a record of being undefeated on a tour since 1927. In front of 15,000 eager New Yorkers at Triborough Stadium, Belfast Celtic carried out the unthinkable and pulled off an astonishing 2-0 upset against Scotland. The Scots’ side had been virtually unchanged to the one that had beaten England only a month previous.

Both teams lined up as follows:

Johnny Campbell grabbed both goals in a game where Celtic drew the plaudits for controlling play with their flawless passing. The Scottish journalists were also full of praise for the Irish League side. W.M. Gall of the Scottish Daily Mail wrote: “There was no question of fluke about the result, the Irishmen outpointed their opponents in every phase of the game”, while Harry Millar of the Glasgow Evening News stated that although Celtic deserved their victory, the shock result was a “bad blow to our prestige.”

After the ten game tour of North America, the team received a hero’s welcome on their return to Belfast on 21st June 1949 and were mobbed by admirers in Belfast, just like they had been in New York City. 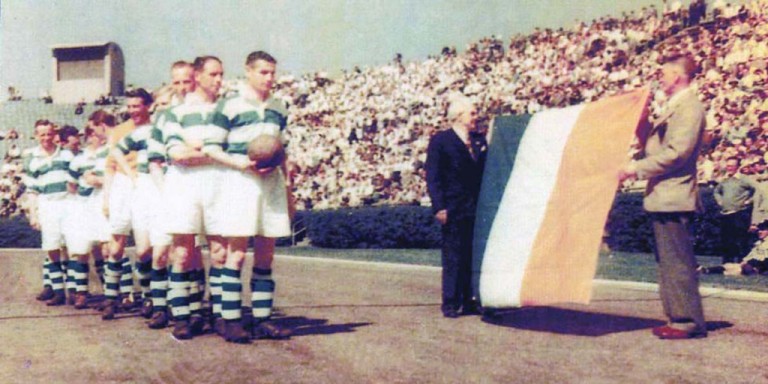 Although not present on the tour, Jimmy Jones was also on show to welcome back his teammates. While doctors said that he would never recover from the vicious assault, Jones went on to become the leading goalscorer in Irish League football with Glenavon during the 1950s as well as being capped for Northern Ireland; despite having one leg shorter than the other after his surgery. Jones passed away in February 2014 in his native Armagh. He was 85.

Soon after the tour, the club’s directors confirmed that the club was to be disbanded. Although Celtic had withdrawn from the Irish League previously, this was to be their final bow, with the exception of a few exhibition games in the 1950s, most notably a 4-2 win against Glasgow Celtic.

Despite rumours of applying for membership with the Republic’s League of Ireland, the Belfast side folded and never featured in football again.

Today, Celtic’s ground, which was colloquially known as ‘Paradise’, is now the site of a shopping centre. Their story is certainly one of what could have been, particularly when considering their apparent overseas brand appeal before the glamour of European club competitions. But the ‘Grand Old Team’ and the American tour of 1949 will forever go down in football folklore.

Simon Rowbotham is a freelance sports journalist who has written for the Manchester Evening News, Belfast News Letter & World Soccer, and has also worked for FIFA.com