‘I speak Basque, my wife, my children and my parents speak Basque, it is our language’. – José Angel Iríbar Athletic Bilbao and Spain Goalkeeper, 1971

In the parallel streets of Guernica the posters fluttered on every wall and read: ‘Aberri Eguna De La Union Vasca – Todos Gernika’. A call to the people for Easter Sunday March 30th 1975, to come and celebrate ‘Day of the Basque Homeland’ in the historic town.

Influenced by the Easter Rising of 1916 in Ireland which saw Irish revolutionaries proclaim a ‘Republic’ on the steps of the GPO, the ‘Aberri Eguna’ had been celebrated since 1932. However forty-three years later this was a Basque Country where culture, language and identity was banned and even symbols such as the ‘Ikurrina’ (Basque Flag) were prohibited under the dictatorship of General Franco. That day 15,000 souls attempted to make the pilgrimage, though most were blocked by the Guardia Civil who patrolled the main roads into the town. Five hundred people managed to escape their clutches and their cordon by hiking through the surrounding mountains.

The ‘Ikurrina’ was unfurled in the town and the celebration went ahead, leading to a fierce reaction from police with up to one hundred people arrested. By November of that year the dictator Franco was no more, though not before having inflicted a state of emergency on the Basque people from April 25th that year with three thousand arrested and tortured in police stations. One of the most infamous torture victims was Fr. Eustakio Erquicia whose ruptured kidneys saw him spend three months in hospital fighting for his life.

Nearly a year after General Franco’s death the Basque football derby between Real Sociedad and Athletic Bilbao – locally known as the bertso derbi – took place. On that winter’s day Josena de la Hoz Uranga made his way through the neighbourhood of Egia in the old town of San Sebastian with kit bag in hand, then went in the players entrance at the Atotxa stadium. In that kit bag was the outlawed ‘Ikurrina’.

For many weeks Uranga, a passionate Basque, had been hounding his teammates about the idea of carrying the flag onto the hallowed turf in a show of unity and strength, despite this being an illegal act under law and punishable with a prison sentence. Uranga, who would a decade later as a member of the outlawed ETA plot the kidnapping and ransom demand of businessman Andrés Gutiérrez Blanco, had persuaded the sister of team captain Inaxio Kortabarria to sew the flag. In the dressing room that day Kortabarria outlined Uranga’s plan to his team mates.

This flag had not been seen in a football stadium since the end of the Spanish Civil War. During that war, from 1936 to 1939 the first Basque autonomy was established with a national team led by Isidro Langara touring Eastern Europe and playing exhibition matches to promote the Republican cause. As Bilbao fell in 1938 the team left for South America and played matches in Cuba, Mexico, Argentina and Uruguay. Most of the players never returned and the team even spent one season playing in the Mexican league under the guise of Club Euzkadi.

On the 5th of December 1976, the teams emerged from the tunnel for the playing of the 94th Basque derby. In an orchestrated show of defiance the captains Kortabarria of Real Sociedad and Iríbar of Athletic carried with them Uranga’s sewn flag; the symbol of the homeland, the flag of the people. A year before Iríbar, another proud Basque, had organised the wearing of black armbands by the Athletic Bilbao team following the execution of two ETA members. The police on duty that day turned a blind eye as the ‘Ikurrina’ took centre stage; change was in the air and Sociedad thrashed Athletic five goals to nil. 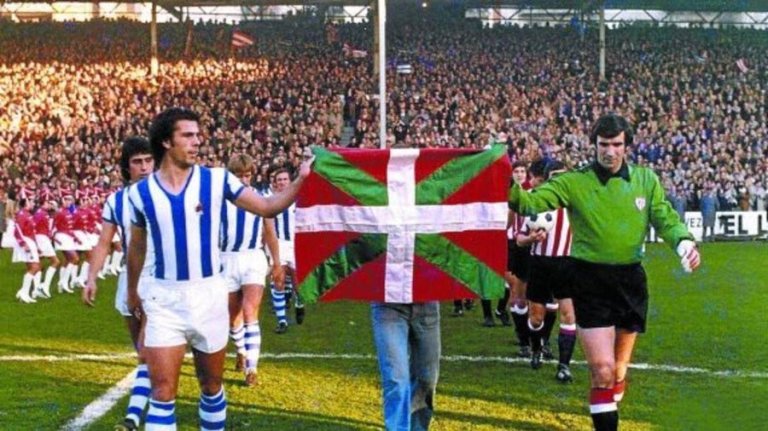 Ten days later a referendum on political reform took place in Spain: the nation was asked ‘Do you approve of the political reform bill?’. More than 97% percent of the population said ‘Yes’. In effect it meant all Francoist institutions such as the Cortes established by the 1942 law, the Francoist movement itself and the Council of the Realm and of the Regency, set up in 1967, would be abolished, while approving a law to allow the existence of political parties and democracy with elections to follow in July 1977.

Before those elections on the 19th January 1977, the flag that Uranga had nervously carried in his kit bag was legalised by the first Adolfo Suárez-led post-Franco government and was free to be flown by the Basque people. In this new environment the two men who had initiated the flag gesture took different paths: Uranga would become a so called ‘freedom fighter’ fighting for Basque Independence, whilst Real Sociedad would thrive under the leadership of Kortabarria, winning back-to-back La Liga titles in the early eighties. In 1977 he also refused a call up to play for the Spanish national team and to date he is the only Basque to ever take such a stance due to ideological reasons.

His vision was to be part of the revival of the Basque national team who had not played officially since their tour of the Americas. The team had played their first match against Racing Club of Paris on the 26th of April in 1937, the same day the German Condor Legion flew over the town of Guernica after more than 1,600 people had perished during the conflict there. A Basque XI had only ever played twice during the reign of Franco, the first time in 1965 for the fiftieth anniversary of Real Union – one of the founding members of La Liga. On this occasion a Basque select played Real Madrid at the Gal Stadium in Irun in 1965, with Santiago Bernabeau kicking off the formalities.

In the summer of 1979 an invitation was sent to the Football Association of Ireland to arrange a friendly game between a League of Ireland select and the Basque national team. After nearly forty years in the wilderness the Euskadi were reborn and captained by the Athletic Bilbao goalkeeper Iribar who had carried the ‘Ikurrina’ nearly three years earlier.

In the ‘Great Week of Bilbao’ around August the 16th, ‘Green’ played ‘Shamrock Blue’ in the cathedral of football – the San Mamés. Langara, the man who had been captain the last time the Basques played, threw the ball in to the backdrop of a carnival atmosphere. The full timers from the homeland were too powerful for their part-time opponents who included a young Ronnie Whelan, soon set for stardom at Anfield.

However, on the night controversy reigned as the Spanish government outlawed the playing of the Basque anthem ‘Gernikako Abola’ before the game. This led to representatives of the newly formed Basque regional parliament refusing to sit in the Presidential box and the Spanish national anthem was roundly jeered all around the stadium. On the pitch the Basques ran out 4-1 winners with Athletic’s Dani scoring a brace; he would go on to be part of the clubs back-to-back titles in 1983 and ’84. Whelan netted for the Ireland Select.

Afterwards the Irish players were treated like royalty, each presented with plaques at a gala dinner hosted by Carlos Garaikoetxea Urriza, the leader of the regional government, who oversaw the re-establishment of the Basque language through the education system in the region. Forward Terry Eviston’s plaque is in his Mother’s house in Dublin, while Pat Nolan, then of Limerick City has his at home in the Treaty county.

Through their history the teams of Sociedad and Athletic have been well known for their refusal to look outside the region for playing talent, however in the late 1980’s as the San Sebastien club struggled to keep up with their rivals, they reluctantly decided to break with tradition and look abroad. In 1989 they splashed out £1.5 million pounds for Irish International John Aldridge, although the initial welcome was not the friendliest: sprayed on the walls around the Zubieta training ground was ‘Ez da atzerritar ongietorria’ – No foreigners welcome.

Motivated with the promise from a local butcher of a T-bone steak for every goal he scored, Aldridge netted forty times in 75 appearances which included a first victory over FC Barcelona at Camp Nou. In essence Aldridge broke the mould with other foreign players now free to follow his example. Like Ireland the history of the Basque homeland has been a tale of oppression and a culture of resistance, and football has played a part in that resistance.