In an era when modern football continues to morph into something I find increasingly difficult to even recognise, yet alone identify with, my unashamedly retro BTLM world feels a warm and comforting place. Over the past 8 years, the hundreds of articles and posts I’ve published represent my own modest celebration of football past and commemoration of football gone.

Indeed, lost football has played a major role in BTLM’s existence as I’ve always been fascinated by the inherent sadness around football clubs and stadiums that were once vibrant and significant parts of their communities, only to gradually lose relevance, decline and decay and finally be lost to the game altogether.

Sharing a similar mindset is the West Yorkshire based photographer Paul Thompson. Paul shoots a wide range of subjects and themes and one of his projects in particular – entitled Ghost Grounds – caught my attention. For this series Paul travelled around England photographing the locations of old football grounds, or usually what became of those grounds long after the last ball was kicked there. Some of the photos are wistful and some are uplifting, particularly where what was once chipped concrete and rusting corrugated iron has been reclaimed by nature.

I’m pleased to feature a selection of the most striking images from Paul’s Ghost Grounds series here. Click on the gallery to view photos at full size and read the stories behind them. Paul’s website and social media profile details are below, so please do check out more of his fine work. 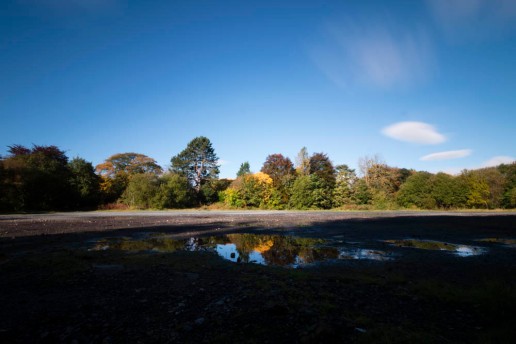 The Seedhill ground was home of Nelson FC from 1889-1971. Nelson was a Football League club from 1921-1931. In the 1922-23 season Nelson finished top of Third Division and were promoted. Capacity was also increased to 20,000. In the summer of 1923 Nelson went on a pre-season tour to Spain and became the first English team to beat Real Madrid on their own soil, winning 4-2. Nelson were relagated after one season in the Second division. After finishing bottom of Third Division North for two seasons, they failed to be re-elected and were replaced by Chester City in 1931. They club folded and were reformed in 1936 and 1946. In 1951-52 the club were Lancashire Combination champions and managed by future Liverpool Manager Joe Fagan. The record attendance was 14,143 v Bradford Park Avenue on April 10th 1926. Nelson’s last game at Seedhill was a 3-5 defeat against Clitheroe on Sunday 28 March 1971, in front of around a thousand fans. Seedhill was demolished in 1980 take make way for the M65 motorway. 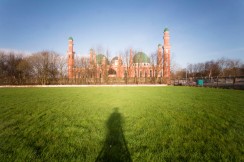 The Bradford Park Avenue ground looking towards The Horton Park End. The ground was home to Bradford Park Avenue from 1907-1973. Bradford Park Avenue achieved their highest ever league position, 9th in the First Division in 1914-15. The record attendance was 32,800 v Blackpool in 1944. After several promotions and relegations they were relegated to the Fourth Division in 1963. In 1970 Park Avenue were replaced in the Football League, by Cambridge United. The last game at the ground saw Park Avenue beat Great Harwood 2-1 on April 21st 1973. Financial difficulties caused the club to be wound up with debts of £57,000. The club reformed as a Sunday league team, and currently play in the National League North. In 2017, the ground was subject of an archaeological dig. 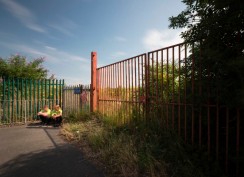 Two employees at an adjacent school have a cigarette break by the gates of the Victoria Ground, home to Stoke City from 1878 – 1997. The ground hosted 7 FA Cup Semi Finals. Floodlights were installed in 1956 and first used in a friendly against local rivals Port Vale. The record attendance was 51,380 v Arsenal, on 29th March 1937. 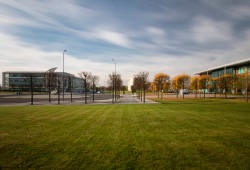 The site of the North Road ground, home to Newton Heath between 1878-1893. Until stands were erected in 1891, spectators would congregate around the pitch. The last match at North Road was a 3-3 v Accrington on April 8th 1893. Newton Heath left when they were unable to afford the rent charged by Lancashire & Yorkshire Railway, which owned the land. The record attendance was 15,000 v Sunderland on March 4th 1893. Newton Heath renamed as Manchester United in 1902. 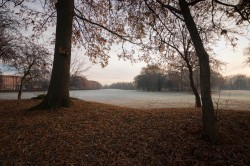 The site of The Archery Ground in Albert Park, Middlesbrough. Home of Middlesbrough FC from their formation in 1876 until 1878. As crowds grew, the ground became inadequate. The lack of dressing rooms meant players had to go home after matches in their muddy kit. In 1878 Middlesbrough were ordered to find another ground by the Park Committee. 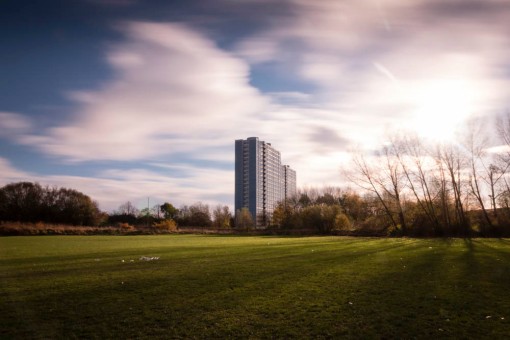 Home to Gateshead FC from 1930-1973. The first league game was a 2-1 victory against Doncaster Rovers on 30th August 1930 in front of 15,545 fans. The record attendance was 20,752 v Lincoln City on September 25th 1937. From 1937 the ground hosted greyhound racing, which boosted finances, but came at the cost of reduced ground capacity. The loss of Football League staus and the end of greyhound racing in 1966 caused serious financial problems. After a fire at the ground in the 1971-72 season, the club moved to the Gateshead International Stadium. However this didn’t ease the club’s money problems, and it went into liquidation in 1973. The current Gateshead FC were formed in 1977, and play in the National League North, also at the International Stadium. 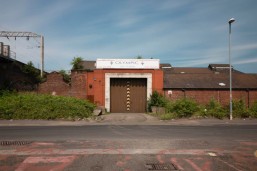 The site of Manchester City’s ground on Hyde Road. City played here between 1887 and 1923. The capacity was initially 5,000 and by 1904 had increased to 40,000 with stands on three sides. The ground hosted an FA Cup Semi Final between Newcastle and Sheffield Wednesday in 1905. In 1920 King George V attended a game between Manchester City and Liverpool. In November 1920 a fire destroyed the Main Stand. City entered discussions with Manchester United about a possible ground share. The rent demanded by United was deemed to be excessive. Plans for the club to move to Maine road were announced in 1922. The final Manchester City match at Hyde Road was a league fixture against Newcastle United on 28 April 1923. The Main stand roof was sold to Halifax Town, and is still in use at The Shay. 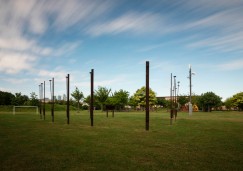 The site of The Memorial grounds Stadium, home to West Ham United (AKA Thames Ironworks) from 1897-1904. The memorial Ground was opened on 22nd June 1897, to coincide with the sixtieth anniversary of Queen Victoria’s coronation. On 11th September 1897, Thames beat Brentford 1-0 in the first League game at the new ground and in front of 2,000 fans. The stadium was multi purpose with a cinder track, tennis courts, and a large outdoor swimming pool. The sculpture marks the site of the Memorial ground, and is also a memorial to those who lost their lives in the docks during the launching of Thames Ironworks’ cruiser HMS Albion in 1898. The inscription on the sculpture reads as follows: ‘This site was once the recreation ground for The Thames Ironworks Shipbuilding employees and the home of their works football club. In 1900 the team turned professional and became West Ham United, moving from this site to The Boleyn Ground at Upton Park. Their emblem today still carries the image of the hammers used by the riveting gangs who built many great steel ships in one of Britain’s most important shipyards. These eleven steel posts are laid out on the construction lines of the deck of HMS Albion, a cruiser built by the Thames Ironworks. At its launch in 1898 into Bow Creek, 38 people died as the tidal wave created by the launch caused chaos around the spectators close to the water. Many of the dead from this tragic event are buried in the cemetery next to this Recreation Ground. ‘This work is a memorial to those victims but also marks a once great local industry and the craft of its workers, bringing back the clang of hammer on steel. The sound of the riveting gangs of the Thames Ironworks is gone forever but the heritage is still celebrated today in the fans chant: “Come on you Irons!” 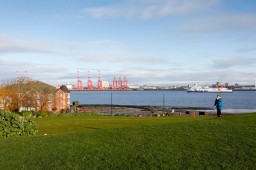 Site of the home of New Brighton Tower FC from 1889-1901, and New Brighton AFC from 1946-1977. New Brighton Tower is probably the only football club to be named after a tower. The Tower in question was built between 1898 and 1900 and when completed it was 173 metres (567 feet) and the tallest structure in Great Britain. The Tower fell into disrepair during the First World War and was dismantled between 1919 and 1921. At the foot of the Tower was a ballroom. Between 1961 and 1963 The Beatles played at the Tower Ballroom 27 times, more than at other other venue apart from the Cavern Club. New Brighton AFC moved to the Tower Ground when football restarted after World War Two. They play in the Third Division North, until they finished bottom in 1951, and were replaced by Workington Town. The record attendence at the Tower Athletic Ground of 16,000 was on 5 January 1957 for an FA Cup third round match against Torquay United. New Brighton played at the Tower Ground until 1977, when the land was sold to the Wallasey Housing Corporation.

Home to Rossendale United from 1898 to 2011. The first game at the ground was a 3-1 victory over Oswaldtwistle Rovers on 3rd September 1898. Between 1901 and 1970 the club competed in the Lancashire Combination. Rossendale won one Division One Championship in 1926–27 and were runners-up in 1954–55. A Division Two Championship was won in 1956–57. The club also won the Combination Cup in 1929 and 1944. 1971-76 was Rossendale’s golden era winning eight trophies in the five season spell. Rossendale also reached the FA Cup Second Round in 1971-72 before losing 4-1 to Bolton Wanderers at Bury’s Gigg Lane ground, in front of 12,000 fans. The club was dissolved in 2011, after many years of financial difficulties. Plans for a reformed club were abandoned in April 2012, after fire destoyed the Main Stand. The record attendance was 3,450 v Shrewsbury Town in the FA Cup, on 22nd November 1975.

Fartown rugby ground, home to Huddersfield Rugby League Club from 1878-1992. The record rugby attendance was 35,135 for a Challenge Cup semi-final on 19 April 1947. The club hosted football once. In 1882 The FA, in a attempt to grow football in a rugby area, staged an FA Cup Semi Final between Blackburn Rovers and Sheffield Wednesday at the Fartown Ground. The game finished 0-0. Blackburn won the replay before losing the final 0-1 to The Old Etonians.

The site of Filbert Street, home to Leicester City from 1891 – 2002. The record attendance was 47,298 for the Fifth Round FA Cup tie against Tottenham Hotspur, on 18 February 1928. Filbert Street suffered bomb damage during World War Two. The ground was rebuilt, (ironically using German POWs) with a capacity of 42,000. Floodlights were installed and first used in a friendley against Borussia Dortmund in 1957. Many greats of the game cut their teeth at Filbert Street, including Gordon Banks, Peter Shilton and Gary lineker. The last game there was a 2-1 victory against Tottenham Hotspur on 11th May 2002.

Paul Thompson was introduced to football when his father took him to see Jack Charlton’s all-conquering Middlesbrough side in the 1970s. His first football work was a record of Middlesbrough’s relegation from the Premier League in 1992-93, as seen from the Holgate End at Ayresome Park. He documented Boro’s last season at Ayresome Park and their move to the Riverside Stadium. He shoots football for When Saturday Comes magazine and ProSports Images. You can see more of Paul’s work at https://photos.wsc.co.uk and https://westyorkshireimages.photoshelter.com/index