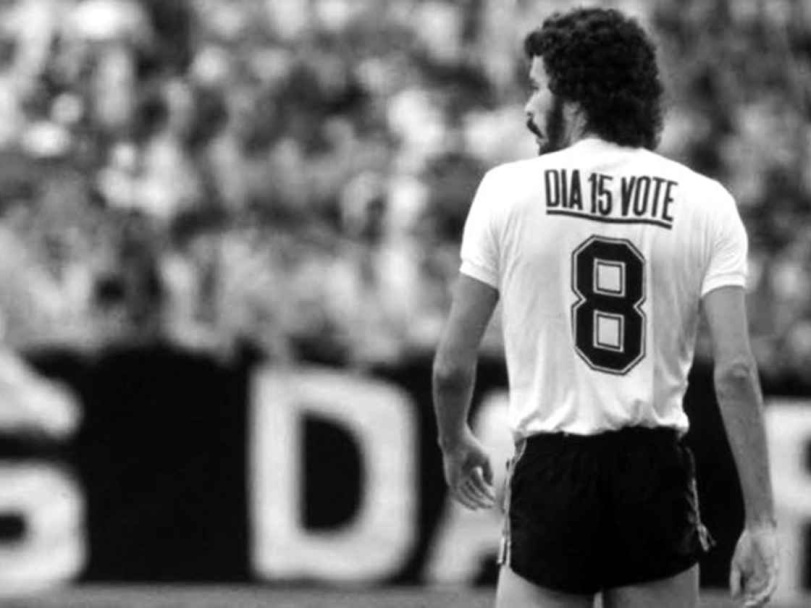 Sócrates Brasileiro Sampaio de Souza Vieira de Oliveira was far from the archetypal footballer. Especially the modern-day player. He smoked daily and he drank regularly – something he blamed on Brazil’s harsh winter conditions and scorching summers that forced a 365-day drinking culture.

Ironically, noting his lifestyle choices, he completed a bachelor’s degree in medicine while playing professional football. He didn’t practice what he preached in his medical studies, but aside from his unique habits off the field, Sócrates was – and still is – one of the greatest to grace the beautiful game. He may not boast the World Cup triumphs of some of his Brazilian forefathers such as Pelé and Garrincha, but the medical student nicknamed ‘The Doctor’ is one of the most iconic names in football history and a hero of the 1980s.

‘I am an anti-athlete. I cannot deny myself certain lapses from the strict regime of a sportsman. You have to take me as I am’ – Sócrates.

Named after the famed Greek philosopher who revolutionised and shaped Western philosophy into what it is today, Sócrates and his mercurial talents had a similar impact on shaping football. He was a midfield general with imaginative, visionary passing who could slice through the heart of the most stubborn defences. At the same time, he was a doctor and political activist – an icon for the working classes of Brazil. He managed to do this while battling his drinking problem and other inner demons.

Doctor by day, footballer by night – Socrates balanced his two professions well in his formative years in Brazil. But he knew he had to make a decision. Luckily for us football fans, he chose to pursue his dream to play for the Brazilian national team. Sócrates began his professional footballing career with Botafogo Juniors who were based in the town of Ribeirão Preto. One afternoon in the early 1970s, his team were playing away in Batatais, a small agricultural town. Socrates didn’t like playing in the rain, so the summer storms that had swept across the cotton fields of Batatais were unwelcome.

But the midfield general was in the zone as he fought through the mud to dribble past defenders with ease. He’d already scored two goals when he danced around the opposition, including the goalkeeper, then stopped on the line, turned around and back-heeled his third and Botafogo’s sixth into the empty net. Instead of running off in celebration, Sócrates simply trotted back into his own half with the occasional flick of his shaggy mane of hair.

His match nearly ended there. The referee, Leal, ran towards him and reached for his red card. “What’s wrong ref?” asked Botafogo captain, Marinho. “I’m sending Sócrates off,” the referee replied. “He’s taking the mickey.”

The act of show-boating or humiliating your opponent is considered a major slight in South American sport, so his acts were seen as an offence worthy of dismissal. His team-mates pleaded with the referee to change his mind, claiming this was common practice for a player who made a mockery of his opponents most weeks. The referee finally overturned his decision and allowed the midfielder to continue.

John Lennon, Fidel Castro and Che Guevara were the early heroes of Socrates, who fought for democracy throughout and after his footballing career. As Andrew Downie writes in his book ‘Doctor Socrates: Football, Philosopher, Legend’ – “Sócrates didn’t really love football the way most of the nation of Brazil did. It was too easy for him.”

As Downie put it: “In a country where the drama comes screaming and pouting from every street corner, television screen and relationship, Sócrates was the diametric opposite of his emotional compatriots. He never understood why his team-mates got so excited about football. It was great fun but it was only a game and, really, how important could it be if scoring goals like that was so easy?”

Well, to many of his fans it was important; more important than anything in the lives of many Brazilians, in fact. So although it was just a game to Sócrates, his performances on the pitch were hugely impactful and influential.

After four years with Botafogo while working for his medical qualifications, he moved to São Paulo-based club Corinthians just after his 25th birthday. This was the turning point in his career as he put medicine to one side in order to give full attention to succeeding in football. He also declared himself available for the national team, a decision that would mark the start of something special.

Given Sócrates’ keen eye for politics, Corinthians was the natural club for him. Time do Povo (The People’s Team) was born out of the pro-democracy movement. It was founded largely by immigrant labourers and had opposed the military dictatorship which ruled Brazil during much of the youth of Sócrates. This was an institution that Sócrates held close to his heart, so the transfer there was the beginning of a perfect marriage. He played just shy of 300 games for Corinthians and scored an impressive 172 goals from midfield. But no question about it, it was his displays in the iconic yellow and green of Brazil that earned Sócrates his international reputation.

He played 60 games for his national team and scored 22 goals. The 1982 World Cup was probably when he was at the peak of his powers. Telê Santana, the Brazil manager at the time, gave Sócrates the captain’s armband. Not a typical captain, Sócrates had an elegant style of encouraging his team-mates with flamboyant gestures and words – he was different, but an innate leader.

The 1982 finals were hosted in Spain. Brazil started against Russia in Seville and deployed a midfield of tremendous talent. Socrates was outstanding in this game, dropping deep to influence play and earning plaudits from fans globally. In the next match, Sócrates played a key role in a 4-1 win over a Scotland team that had the temerity to take the lead. He also dazzled in the games against New Zealand and especially Argentina, but Brazil eventually succumbed in the latter stages to the ultimate champions, Italy. Along with Hungary in the 1950s and the Dutch sides of the 1970s, this Brazil team is arguably the greatest to never win a major international competition.

The Brazil captain Sócrates exchanged shirts with young Italian defender Giuseppe Bergomi and staggered off the pitch in a dejected manner. “In the bowels of the Sarria stadium, the Brazil dressing room was like a morgue,” wrote Downie in his book on Socrates. Brazil player Paulo Isidoro kept repeating: ”We lost to Italy, we fucking lost to Italy.” Apparently, doors and other parts of the dressing room were smashed up. Oscar said: “You lot who were complaining about being homesick, are you happy now? Well, you’ll be home tomorrow.”

Sócrates was outwardly calm but heartbroken inside. He had spent the previous month writing a diary for Brazilian magazine Placar, jotting down his thoughts on hotel stationery and handing them to the editor of the magazine to be transcribed. After this game, however, the only words he could muster up were: ‘Que pena, Brasil’. Roughly translating as ‘what a shame’, Socrates’s thoughts are evident – from a colourful, expansive writer one day to three words the next.

Sócrates had developed a warm relationship with Zico, the number ten who Brazil built their team around in the post-Pelé era. When Corinthians played Flamengo – Zico’s team – Zico would wind up Sócrates by labelling him as ‘Frankenstein’. Socrates responded with insults such as ‘Shorty’. The five-foot-eight-inch Zico would respond by saying that size doesn’t matter. The friendly trash talk was the basis of a relationship that went beyond the football pitch.

The real rapport between the two developed from 1979 when Brazil manager Claudio Coutinho selected them both for the Brazil team he was trying to rebuild after a terrible World Cup in Argentina. Sócrates would call Coutinho was one of the best managers he ever had. Enraptured by the 1974 style of Total Football employed by the Netherlands, the ex-army captain saw Brazil through the bad years post-Argentina 1978 from a caretaker-style role.

Under Coutinho, Sócrates and Zico became a great double-act and the press in Brazil started to whip up a debate – similar to the Messi versus Ronaldo argument in modern times – over who was the better. Zico was the more accomplished, as Sócrates himself often pointed out to try and prevent any rivalry from developing. But Sócrates’ performances for the national side could not be ignored. A popular Brazilian magazine ran a poll of more than 2,000 fans from 17 clubs which of the two they’d rather see in their team. Nine preferred Sócrates, eight chose Zico.

Sócrates had a few fleeting spells elsewhere. Though he once said that he would never play in Italy for money, the Brazilian joined Fiorentina for the 1984-85 season. He returned to Brazil to play for Flamengo then moved on to Santos. Quirkily, he joined English club Garforth Town in 2004 to make a 12-minute cameo appearance against Tadcaster Albion. Aged 50 and playing for just travel expenses in the Northern Counties East Football League, Garforth’s Wheatley Park was a distant world away from the Maracanã in Brazil. Romário also played for Garforth, at a different time. Now there’s a couple of trivia questions for any quiz writers out there.

His leadership of the national team is unrivalled in the modern-day, his haircut and beard still an iconic visual part of Brazillian football history and his mesmerising talent on the field will never be forgotten. But really, Sócrates was so much more than a footballer. He hated the military dictatorship that ruled Brazil at the time. They had a cynical slogan aimed at silencing dissenters: ‘Brazil – love it or leave it’.

Sócrates wanted change. He was a pivotal figure in a movement at Corinthians called ‘Corinthians Democracy’. Players, coaching staff and club employees would vote on all kinds of issues of interest to the collective, from which players to sign, to whether the team bus should stop to allow people to get off and relieve themselves. He won battles within football and then after it too. Corinthians players wore shirts with ‘Vote on the 15th’ printed on the back, urging the public to take part in the upcoming elections that were the start of the movement to overthrow the dictatorship.

Later that year, Corinthians won the São Paulo state championship with ‘Democracia’ printed on their shirts. Sócrates described the moment to Alex Bellos, author of ‘Futebol’ that it was “perhaps the most perfect moment I ever lived. And I’m sure it was for 95% of my teammates too.”

Unfortunately, the lavish lifestyle eventually caught up with Sócrates and he died aged 57 in December 2011. Much like George Best, Socrates didn’t admit his problems until it was too late. His death was premature, but one final wish of his came true on the day he died. He said he wanted to die on a Sunday when Corinthians won. The club had won Série A that season to fulfil their hero’s wishes to the letter.