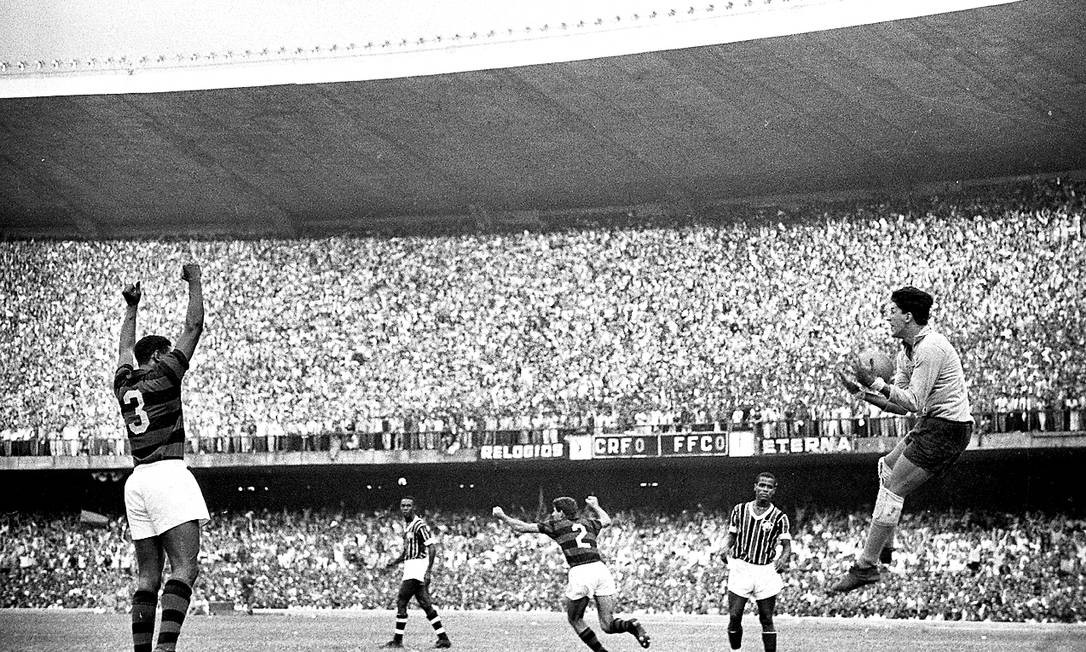 Just about every big city in the world has a famous football rivalry. Milan is split between AC Milan and Internazionale; north London has seen Arsenal and Tottenham Hotspur fight it out for decades; Buenos Aires has arguably the most intense discord in football between Boca Juniors and River Plate, and it’s no different when it comes to Rio de Janeiro in Brazil.

It would have been an oddity if the second-biggest city in Brazil, a country that lives and breathes football, didn’t have a significant football rivalry and this particular one between Flamengo and Fluminense in Rio is one of the oldest in the game’s history. As narrated by the Brazilian novelist, Nelson Rodrigues: “Fla-Flu came into existence 40 minutes before nothing”.

Fla-Flu is an acronym created by Mário Filho to reflect the conflict between the two clubs and it is a match that can’t be compared to any other in the city. Despite the presence of other successful Rio clubs like Botafogo and Vasco da Gama, this rivalry has an extra dimension to it and it’s impossible to tell the story of one without the other featuring heavily.

Fluminense was founded on 17th July 1902 by Oscar Cox, a sportsman born in Brazil from English parents who is often credited with bringing football to the South American country. The colours for the club were chosen to be red, white and green which gave the club its nickname o Tricolor.

The name was initially supposed to be Rio Football Club, but seeing as there was already another club in the region with that name, Cox and his group of fellow friends and founders decided to think locally and take reference from Rio’s Guandu River. He opted to take Rio’s Latin name of Flumen and name that club after it. Cox starred in Fluminense’s first-ever game when they beat Rio FC 8-0 and he was also in the side that won Fluminense’s first-ever title – the 1906 Campeonato Carioca.

One of the key players in that title-winning squad was Alberto Borgerth. The son of a Brazilian father and Hungarian mother, he was an exemplary athlete and a competent footballer. However in September 1911, he was part of a group of players who were expelled from the club and he didn’t take the decision lightly. In the aftermath he decided to return to the club where he had rowed as a child: Clube de Regatas do Flamengo.

The club’s status as a rowing club didn’t deter Borgerth who suggested it created a football section. He had the option of joining one of Rio’s other football clubs like Botafogo or Vasco da Gama, but this choice would lay the early foundations for what would become one of the biggest matches in the Brazilian calendar.

Two months later and him and nine other players were ready to play. In an extraordinary general meeting on Christmas Eve that year, a motion against the club taking part in football competitions was defeated and so Flamengo’s football section was born. The fledgeling club took the famous red and black colours of the rowing team.

From the early days Fluminense became a team of the upper classes of the city thanks to their English roots. It was typical to see supporters dressed in upmarket clothing and, as a consequence, black or mixed-race players were prohibited from representing them. Shockingly, one of the first mixed-race players in the club’s history was named Carlos Alberto who had to cover his face in rice powder before he would be allowed to play.

It was an extreme measure taken to avoid problems with the fans, but soon it became a policy synonymous with the club. Fluminense supporters embraced the fact that their club was involved in this activity and frequently created songs celebrating it. Even today before every big match, rice powder is often thrown around the pitch by fans seeking to create a striking atmosphere.

Flamengo took the opposite path and became a club for the people – all people. Its fans were mostly from the working or lower classes and the connection to this socio-economic group has been a topic of interest for their rivals. When Flamengo lose, opposition fans can often be heard chanting “Ela, ela, ela – silencio na favela” (“Ela, ela, ela – silence in the favela”), as told by Alex Bellos in his book ‘Futebol: The Brazilian Way of Life’.

Nowadays, despite being the younger of the two, Flamengo is one of the best-supported clubs in Brazil with a reputed figure of around 35 million followers. To compare, that’s more than the population of Australia, the Netherlands or Peru making the Naçao Rubro-Negra a dynasty in their home country. It’s easy to understand why Fla-Flu is such a unique encounter in Brazil: these two teams represent two souls of the same city. There’s no division based on religion or politics, it’s just a matter of pride – like a war between brothers.

There have been many significant clashes between the two over the decades, such as the encounter in 1963 when 194,000 people filled the Maracanã Stadium. This was the third-biggest attendance ever at the venue, behind the Maracanazo – the 1950 World Cup final between Brazil and Uruguay – and a match between Brazil and Paraguay four years later. Unfortunately, this match between Flamengo and Fluminense wasn’t quite as dramatic and ended 0-0. 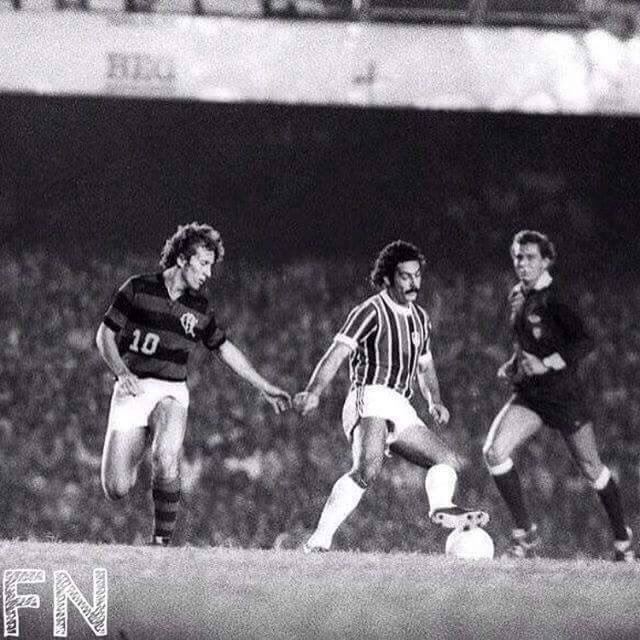 Another element that makes matches between these two teams special is the football calendar in Brazil. With the national and state championship both happening during the same calendar year, the two sides get to meet at least three times every 12 months and this frequency has only added to the aura and intensity of this rivalry.

In 1916, Fla-Flu became one of the first-ever matches to be suspended in the Carioca league’s history due to a pitch invasion from Fluminense fans enraged at the decision of the referee to allow Flamengo to retake a penalty three times. In 1941 the two squared off in the same competition with both competing for the title. Flamengo needing a win to take the championship while a draw would have been enough for Fluminense.  Towards the end of the first half the Tricolor led 2-1 before conceding a late equaliser.

From then on the match took a dramatic turn. At the time Flamengo’s stadium was in the middle of the Rodrigo de Freitas Lagoon which meant that every time the ball flew out of the stadium it would land in open water. Fluminense’s players took advantage of this and started to deliberately overhit shots out of the ground in a bid to waste time. Having anticipated this beforehand, Flamengo’s board had ordered rowers to be stationed in the lagoon so as to return the ball quicker and carry on with play. This shrewd move failed to work however as Fluminense held on and won the title. 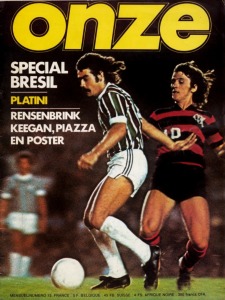 The most famous game of all came in 1995 and is known as the ‘belly game’. Once again it was the Campeonato Carioca with Flamengo, at home on a rainy day at the Maracanã, needing only a point to win the title. Flu reached half-time with a 2-0 lead thanks to goals from Renato Gaúcho and Leonardo. Flamengo battled back strongly in the second period and levelled the scores with efforts from Romário and Fabinho. The game looked set to go their way until, three minutes from time, Flu’s Renato Gaúcho deflected a cross into the net through his belly from a clearly offside position to win Fluminense the title. This goal was never credited to him and instead was attributed to Ailton who had crossed the ball into the box.

Renato Gaúcho is one of the most important players in Fluminense’s history alongside other huge names like Telê Santana and Rivelino. Across the divide Zico’s name stands out and, as is common in most rivalries, many stars have represented both sides of the divide including contemporary greats such as Romário and Ronaldinho.

In the present day players like Ganso and Gabriel Barbosa have taken up the mantle and while the derby is still played with much of the same passion, intensity and colour as it was back in 1912, the two clubs are enjoying very contrasting fortunes.

Fluminense has struggled in recent years, failing to win a trophy since 2012 and currently languishing in the bottom half of the league. It’s a sorry state of affairs for such a revered institution and one made harder still by their rival’s success and current status as South American champions. Inspired by ex-Benfica coach Jorge Jesus, goalkeeper Diego Alves and full-backs Rafinha and Filipe Luís, the Rubro Negro recently overcame defending champions River Plate in a dramatic final in Lima to win the Copa Libertadores, a success to add to the league title won in comfortable fashion.

But no matter how different their form is, the passion and intensity of this rivalry will always endure.