While the advent of ladies football in Britain can be traced right back to the 1870s, it was only towards the end of the First World War that it became an accepted and popular alternative to the male game. This was through necessity as much as choice. With millions of British men abroad fighting on the Western Front, women took traditional male roles in both the workplace and increasingly in leisure. By 1917 there were 900,000 women working in factories directly supporting the war effort.

The work that the Munitionettes did was repetitive and dangerous so factory welfare officers encouraged ladies football teams to be created to aid health and wellbeing. Teams sprang up the length and breadth of the United Kingdom and the most famous of them all was Dick Kerr’s Ladies. Resplendent in their trademark bubble hats, this Preston based side drew large crowds and played charity fixtures up and down the country raising money for injured servicemen during and after the war.

Another famous side was Blyth Spartans from the north-east who were taught to play by naval ratings on a local beach and remained unbeaten throughout their two-year existence. The team won the first Munitionettes Cup held in 1918, beating Bolckow-Vaughan of Middlesbrough at Ayresome Park in a Final played in front of a crowd of 22,000. Blyth’s star centre-forward was Bella Raey, the daughter of a local coal miner, who scored a hat-trick in the Final, 133 goals in one season, and even went on to play for England.

At the end of the First World War most women lost their jobs in the munitions factories but retained their interest in playing. Some works teams reformed as civilian sides and others, like Dick, Kerr’s retained the support of their employers. Crowds of more than 50,000 would turn out to watch games until the FA banned women’s football from being played at the grounds of its member clubs in 1921, ostensibly to protect the male game.

As part of our WW1 series this Vintage post collects up team shots of some of the most notable ladies Munitionettes team of the era. Do also visit donmouth.co.uk which is a wonderful online resource for women’s football. 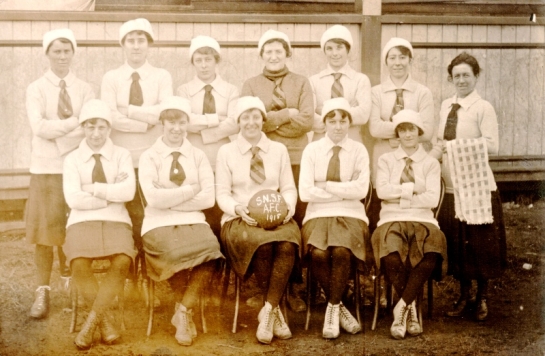 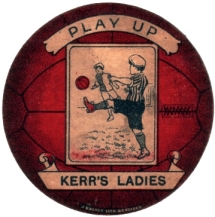 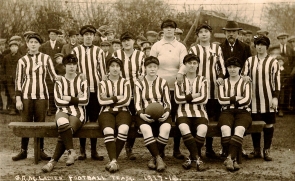 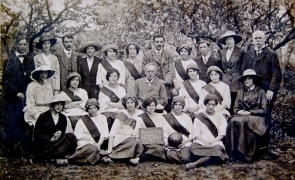 1918 – Blyth Spartans with fans after winning the Munitionettes’ Cup