Those who follow the @BeyondTLM Twitter account will probably have noticed our enduring fascination for the magnificent ugly-beauty of 20th century post-war football stadiums. It’s a childhood thing really; when you grow up near the hulking, monolithic edifice that was old Hampden Park, your tastes can develop one of two ways.

You can detest with Prince Charles levels of vitriol the concrete carbuncles that were typical of Hampden and the many stadiums constructed or redeveloped in a Modernist or Brutalist style, or you can harbour an enduring fascination for the harsh angles, monochromatic palette and daunting sense of scale such places convey. Guess which camp I’m in.

The fine Brutalist Football (@Brut_Football) Twitter account was started in 2013 by Mathew Britton (@pigeonpost) to cater for those with similar tastes. It’s not been so active over the past 6 months and we’re pleased to announce that BTLM is taking over it’s running, so do join us there for a celebration of 20th century modern football imagery. Let us whet your appetite in the meantime with this latest Vintage post featuring a selection of stands and stadiums typical of the sort of images you’ll see on Brutalist Football. 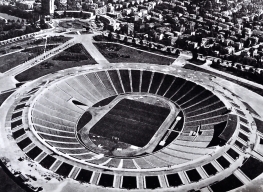 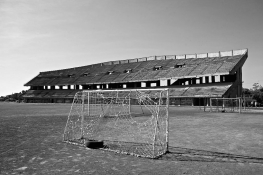