Even the most creative of football journalists might have struggled to generate much enthusiasm for this particular late 2010-11 La Liga fixture. With Spanish attention focused entirely on Barcelona’s Champions League semi-final clashes with Real Madrid, the Catalans’ League visit to play Real Sociedad just days before the decisive second leg wasn’t setting pulses racing in anticipation. This was a game between teams 50 points apart in the table after all, this in a competition that Barcelona had to all intents and purposes already won. As a fixture it appeared little more than limp filling in the middle of a giant clásico sandwich. 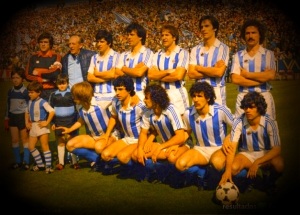 Pitching the game as the irresistible force taking on the immovable object suggests comically misplaced levels of hyperbole, yet this was a game that did feature a genuine historical subtext. Barcelona represented the irresistible force: their brilliant team arrived into this fixture unbeaten in 31 League matches having spent the season mercilessly pummeling all comers into submission. The immovable object part of the equation was a little more abstract; less the contemporary, relegation-threatened Real Sociedad of 2011, more the spirit and the legacy of the tough, unyielding Sociedad team of three decades earlier that their contemporaries would be trying their best to channel.

That historic early 80s team put together a record 38 game unbeaten run between April 1979 and May 1980 and this remains the solitary domestic landmark neither of Spain’s big two can lay claim to. With Barcelona now homing in on this record, Real Sociedad’s 2011 team knew that nothing less than a victory would guarantee their club’s proud record remaining intact.

Real Sociedad’s initial ascent to become a force in the Spanish game had been rapid once club legend Andoni Elizondo established them in the top flight during the mid-1970s. Elizondo’s teams were young and hungry and drawn from the youth ranks and local youngsters his scouts spotted from around the local Guipúzcoa province. The philosophy he instilled in his players was a simple one focused on traditional Basque principles of collective teamwork and strong physical preparation. His former assistant, Alberto Ormaechea, took over and continued to move the club forward while working to the same template.

By the end of the 1970s a promising side with a firm identity was taking shape. Defensive obduracy underpinned the team thanks to a back four that was big, strong and highly uncompromising, even by the standards of a tough Spanish League. This was no collection of star names – just right back Genaro Celayeta was capped for Spain – but it was a mean, organised unit with an extra layer of protection provided by first-choice national keeper Luis ‘the Octopus’ Arconada. While not especially imposing physically standing just 5ft 10″ tall, Arconada projected a giant presence and was another in a long line of great Basque keepers.

There was creative talent further forward. The focal point was Jesus Zamora, a technically strong midfield playmaker with a penchant for scoring long-range goals. His clever promptings supplied the front trio led by Jesus Maria Satrústegui, an imposing figure and consistent scorer with both head and foot. Satrústegui was supported from wide positions by the clever and inventive left-sided Roberto López Ufarte – another player with a keen eye for goal – while Idígoras provided pace and energy on the right. 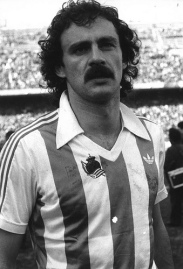 Signs of what was developing became apparent in the second half of the 1978-79 La Liga campaign. The individual errors that had been common earlier in the campaign were gradually eliminated and Real Sociedad suddenly became a tough proposition to beat, or even score against. Undefeated over the last half-dozen games of the season, the Basques rose to a fourth place La Liga finish. Those unbeaten games would prove to have a greater significance than anyone realised at the time.

The team was virtually unchanged for the following season and this continuity, along with its growing self belief, meant that Real Sociedad hit the ground running and matched title favourites Real Madrid point for point. Ormaechea’s game plan followed the traditional Italian model of winning your home fixtures and drawing the away ones. It worked well for them – in their ramshackle Atocha stadium, opponents wilted in the face of Sociedad’s high-powered football and the crescendo of noise from capacity crowds; in away matches pragmatism ruled with the team defending deep and hoping Satrústegui might grab something on the counter attack. It was not always easy on the eye, but it was effective: Arconada was conceding just a goal every other game and, even when opponents did score past him, such goals were typically little more than consolation efforts.

By November 1979, Sociedad’s unbeaten run stood at 14 games but looked under threat from the much-anticipated visit of co-leaders Real Madrid. Los Merengues were unbeaten at Atocha for 22 years, a statistical record that was swept away as easily as the visitors were. On the day a hungrier, more competitive Sociedad side romped to a 4-0 win with Del Bosque’s second half dismissal for arriving too late into too many tackles summing up Madrid’s miserable afternoon.

Now doubling up as a genuine title challenge, the unbeaten run remained intact despite several scares. Successive autumn home matches saw Sociedad trail Barcelona 3-2 and Zaragoza 1-0 as the final whistle loomed, yet in both matches two last-gasp goals turned impending defeats into unlikely victories. Ormaechea was typically self-effacing when he claimed his side had been lucky in these games; in reality he was underplaying the enormous well of pride and determination his team drew from. They were masters of the strong finish; they were redeemers of the lost cause.

In February of 1980, Sociedad hosted Basque neighbours Athletic Bilbao knowing a win would take them to within one game of Barcelona’s 26 match unbeaten run from 1974. Bilbao were routed 4-0, the record was matched with a hard-fought draw at Valencia and a new benchmark set with a 4-0 home thrashing of Rayo Vallecano.

The vital rematch with Real Madrid in the Bernabéu was the next big test. Madrid tore into the Basques from the start, determined to put an end to the visitors’ 31 game run and establish a tangible lead in the League. An inspired performance by Arconada and two first half Sociedad goals against the run of play looked likely to thwart them. Madrid scrambled a goal back with five minutes remaining and then, deep in injury time, the quarrelsome Juanito was brought down in the box. He got up to score the resultant penalty equaliser and crowned an eventful game by getting sent off for scuffling with Arconada. Sociedad had maintained their unbeaten run but a great opportunity to pull away from Madrid in the League had been lost. Worse still; López Ufarte picked up a knee injury that ended his season.

The conclusion to both the unbeaten run and the title campaign arrived in the penultimate round of the season. Now unbeaten over 38 games, Real Sociedad led Madrid by a point as they travelled to a mid-table Sevilla side coached by Miguel Muñoz, the former Real Madrid player and manager. Muñoz made no secret of wanting to help out his old club and his players had extra motivation thanks to a morally questionable, if legal, win bonus on offer from Madrid if they could find a victory against the unbeaten League leaders.

It was a bruising encounter. Sevilla’s aggression cost them two red cards but did succeed in subduing the visitors. With the game seeming set to end 1-1, up popped the Argentine winger Daniel Bertoni to toe-poke a late winner for Sevilla. With Madrid winning at Las Palmas, a shattered Sociedad surrendered both their unbeaten record and leadership of the table. The Basques 2-0 win over Atlético Madrid on the final day was to no avail as Real Madrid also won to take the title by a point.

Reaction in San Sebastián was a mixture of great pride in the record-breaking run and the surprise title push offset by disappointment that a once-in-a-lifetime achievement had not brought more tangible reward. Happily for Real Sociedad, this unbeaten run proved the opening fanfare welcoming in a halcyon era rather than the sounding of the last post for a brief moment in the sun. That first League title arrived the very next season and was retained the year after. Ironically these championships were won despite fifteen defeats suffered over the two campaigns. That sheer impregnability and obstinacy from 1979 and 1980 was never quite recaptured, even though ultimately the outcome was better.

Thirty years have passed since their golden era and Real Sociedad has long become accustomed to a diminished role as steady divisional makeweights. This evening was a little different though. As the players ran out to face Lionel Messi and his stellar teammates, they knew this 2011 fixture was an opportunity to relive a little of the glory days of their predecessors and keep alive a proud part of the club’s heritage. A spirited performance was rewarded with a delicate Diego Ifrán goal levelling the score at 1-1 after 72 minutes. With a draw no more use than a defeat in the circumstances, Real Sociedad battled on gamely and were grateful for a giant slice of fortune when the referee awarded them a very dubious penalty with just 7 minutes remaining.

Xabi Prieto took the kick, unconvincingly, but his effort still squirmed past José Pinto in the Barcelona goal. The home side clung on to their 2-1 lead and Barcelona’s unbeaten run stalled 7 games short of Real Sociedad’s 1980 benchmark. Winning the League title and the Champions League was decent enough compensation for the Catalans, but on this particular spring evening in northern Spain at least, the irresistible force was defeated by the spirit of the immovable object.