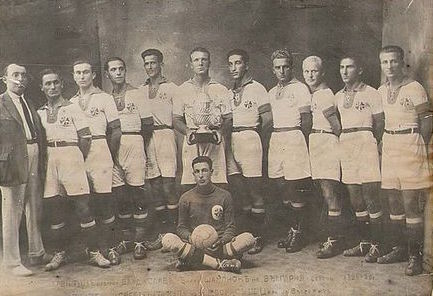 In common with neighbouring Romania, Bulgaria had a similar background of perennial bureaucratic meddling in football during the communist era. Clubs were merged, de-merged, named and renamed on an all too regular basis; yet, with the exception of just five clubs, the rest of the country’s former champions have managed to survive through to the present day in some sort of recognisable form.

We’ll start our round-up of Bulgaria’s five Lost Champions in the Black Sea resort of Varna. Winners of Bulgaria’s inaugural championship in 1925 following a knockout tournament, Vladislav Varna had been formed four years earlier by disgruntled members of the Ticha Varna club and named after a fifteenth century King of Poland and Hungary. Vladislav retained the title in 1926 in bizarre circumstances when their final opponents, Slavia Sofia, refused to turn up for scheduled replays. This granted the Varna club the championship by default, though they had to wait some months for the trophy to be physically re-appropriated from the Sofia club who had held onto it after claiming victory in their first match.

Vladislav remained a leading club and secured a third title in 1934, but two years later were excluded from the League for fielding an irregular player. Their return was swift although by now the club had been overtaken by bitter rivals Ticha Varna, the title winners in 1938. The change in government at the end of WW2 brought fundamental changes to the Bulgarian game with the two big Varna clubs merging in 1945 to become Ticha – Vladislav. In 1959 the name changed again to Cherno More and that club remains active in the top flight today while claiming ownership of the history of both Vladislav and Ticha.

The Bulgarian capital has lost a couple of former single-time champions from the 1930s in AS23 Sofia (1931) and Sportklub Sofia (1935). As their name suggests, Athletic Slavia 23 was formed in 1923 through a messy merger of three Sofia clubs and went on to take its solitary title eight years later. AS was an early example of an army team, in this case the Tsar’s Army, with most of its players also serving officers. In 1944 and following the Soviet occupation of Bulgaria, AS23 was identified as a fascist club and two of its administrators, both WW1 veterans, were executed. The club was merged with a couple of other smaller clubs from the capital and the subsequent lineage eventually leads you to the very familiar name of CSKA Sofia.

Sportklub Sofia formed three years earlier than AS23 with their roots again lying in a complex merger of existing clubs. Its solitary title arrived in the mid 1930s with performances subsequently falling away towards the end of the decade. During the war Sportklub was merged with two smaller clubs and played as Sportklub-Sredets for two years until the Soviet invasion in 1944.

From the small city of Veliko Tarnovo, FC Etar emerged from the chaotic aftermath of the collapse of communism to claim the 1991 title. The club came into existence in 1924 through the merger of six local clubs and enjoyed easily its best era in the late 1980s and early 90s during which that solitary championship was won. FC Etar ceased professional activities in 2003.

2 thoughts on “The Lost Champions Of Bulgaria”