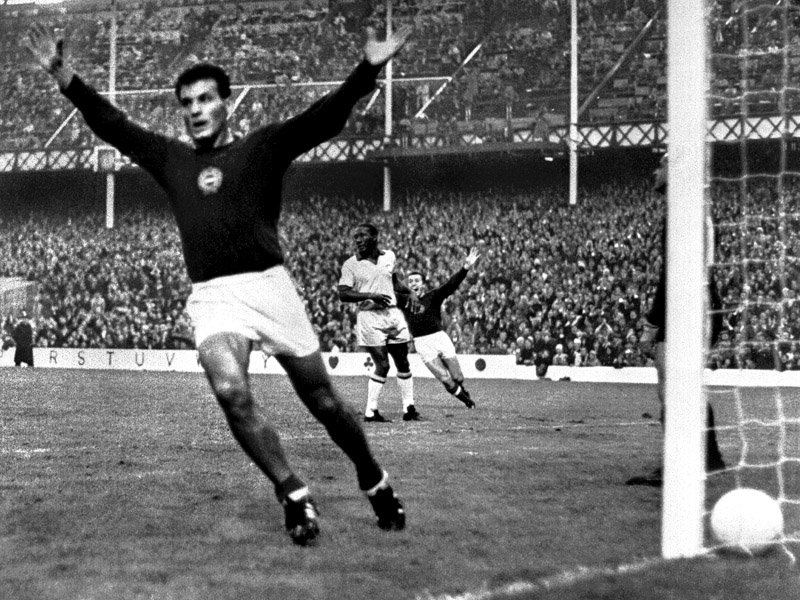 Each edition of our regular Stars of BTLM series features a reappraisal of the career of one our favourite 20th century footballers. There’s some basic criteria that underpins our choice of featured players as we try to focus on those whom we believe have not been as well served by history as they should have been. The reasons such players are underrated can be diverse: some had injury blighted careers, some played for the wrong club or the wrong manager at the wrong time and some have just been swept into a dark corner of football history through simple bad luck. Stars Of BLTM is our own modest attempt at recalibrating reputations to match the talents of our featured players. Our latest inductee is the late, great János Farkas from the overlooked, post-Mighty Magyar Hungarian generation of the 1960s and early 70s. 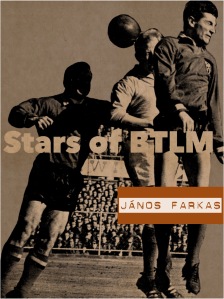 If you remember just a single flash of the right boot of János Farkas, it’s likely to be the one that illuminated Goodison Park during the 1966 World Cup group game between Hungary and Brazil. With the game level at 1-1, Farkas perfectly timed a run into the box to meet and brilliantly volley Ferenc Bene’s cross low into bottom corner. Scoring the best goal of the tournament introduced a little known player to a worldwide audience, yet Farkas had already been a star for years back home in his native Hungary.

Budapest born, a young Farkas caught the eye playing and scoring freely for his local junior side, St Janos. 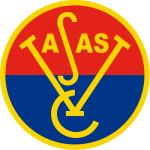 His potential quickly attracted the attention of local scouts and on his 16th birthday he signed youth terms with Vasas, the club affiliated with Budapest’s iron and steel workers. He responded well in his new environment and his fledgling career took its first, significant step forward 18 months later when he earned a first Hungarian youth cap. Selected to play as a striker, Farkas repaid the faith shown in him by scoring a hat-trick in a 3-0 win over Yugoslavia. 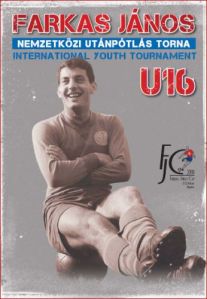 This performance was persuasive enough for the coaching staff at Vasas to grant him a first-team debut, albeit on the right-wing as it was felt that he was too frail to succeed as an out-and-out centre-forward. Used sparingly at club level in those early months, it would be international football that again gave him the platform to showcase his talent. Farkas was selected alongside Vasas teammate and close friend Kálmán Mészöly for his country in the 1960 UEFA Junior Tournament; a competition Hungary duly won with Farkas the outstanding player on show.

His first full season as a Vasas regular in 1961 was a resounding success with the dozen goals he scored from the right-wing contributing substantially towards the club’s League championship win. His international career flourished too firstly earning a B cap and then a full international debut in a Hungary side being built with the 1964 Tokyo Olympics in mind. Vasas retained their title the following season despite Farkas’s limited impact. It was a season disrupted by poor discipline and his liking for ladies and liquor at the expense of training would be an issue that would dog his career.

His erratic club season meant that although Farkas travelled to Chile as part of the Hungarian 1962 World Cup squad, he was consigned to a role as nothing more than a spectator. The winger’s form picked up again over the next couple of seasons with his all round contribution significant enough for Vasas to tolerate, through gritted teeth, his recurring off pitch aberrations. There was a typical chain of events: a training session skipped in favour of a drinking session, the club fining him and criticising his behaviour, then imposing only a token suspension as he was becoming too important a player to be missing for long. 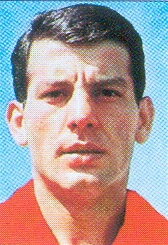 The 1964 Olympics heralded the start of the peak years of Farkas’s career. Ferenc Bene scored most of the goals, but it was Farkas who was the most influential player in the Hungarian team and his gold medal was well deserved. His club coach, Rudolf Illovszky, was instrumental in getting the best out of his errant playmaker-in-chief. With constant cajoling he succeeded in focusing Farkas on his football and minimising the off-pitch distractions that were hindering his career. Just as significantly, Illovszky switched him from the right to the left side of the pitch. Farkas was predominantly right footed, so playing on the right-wing meant that he would habitually be attacking space on the flanks outside the penalty box. Illovszky appreciated his finishing skills and wanted him to get in the box more to take advantage of this. The coach reasoned that if Farkas played at inside left or on the left-wing, instinctively he would drift inside to more dangerous central areas with better opportunity to shoot. 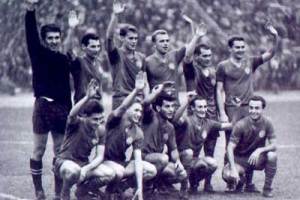 The reverse winger tactic is common today of course, but this was quite a revolutionary move at a time when wide players nearly always played on the side that corresponded with their stronger foot. Farkas’s movement was clever and he had a natural instinct for making telling runs into the box at opportune moments. He was quick too and his main weapon was that booming right foot which was a source of goals from close range and from distance. That goal against Brazil summed up his virtues perfectly and it was a pitch-perfect execution of what Illovszky had in mind when he devised the switch.

Scoring a personal best total of 18 League goals in the 1965 season was testament to how much János Farkas was revelling in his new role and Vasas duly recaptured the Hungarian title on the back of his vibrant form. His international career had stuttered, but his all-round improvement and the appointment of his club mentor Illovszky as national coach saw him finally emerge as a national team fixture. Hungary would take a truly world-class front trio of Farkas, Flórián Albert and Ferenc Bene to England for the World Cup.

While Hungary’s Quarter-Final defeat to the Soviet Union in the 1966 tournament was disappointing, Farkas had every reason to be pleased with his 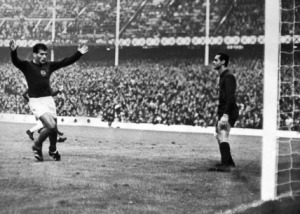 performances which were in keeping with his spectacular form throughout 1966. He hit a purple patch in the autumn in particular: in successive internationals Hungary defeated France 4-2, Austria 3-1 and Denmark 1-0 with Farkas scoring all 8 of his country’s goals. At club level the goals were flowing too and he was involved in a three-way race to be the League’s ‘King of Goals’ with his international attacking partners. Albert and Bene scored 24 goals apiece and seemed likely to share the award, but nothing could deny Farkas in what was the most effective and successful year of his career. A confidently dispatched hat-trick in the last round took his total to 25 and pipped his rivals to the award. Heady days indeed with Vasas the unbeaten League champions and Farkas the main inspiration and source of goals for both club and country.

Vasas would be gradually eclipsed in the coming seasons by Ferencváros and Farkas would drift back into bad off-field habits. A hat-trick in a Nations Cup qualifier against East Germany was a rare highlight as his motivation and attitude became increasingly questionable. Vasas struggled with injuries and their star man was being regularly shuffled around to fill gaps: sometimes he was being played as an out-and-out striker, sometimes in a deeper midfield role which compounded his all round frustration. 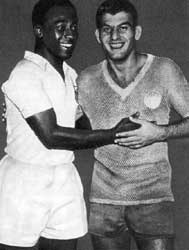 By 1969 his club career was in steep decline and his international days came to an end after a heavy World Cup play-off defeat to Czechoslovakia. When he went out carousing once again in the wee small hours with his drinking partner Mészöly the night before a cup-tie, the Vasas management was determined to take a strong stand. Both players were handed lengthy suspensions and the long and often-difficult relationship Farkas and Vasas had endured would never recover. Demanding a transfer as he did was an ultimately futile, if understandable gesture; Hungary was nothing like other eastern European nations such as Yugoslavia where players had some control over their own destiny. By the time he was eventually reinstated to the first team his role had become little more than provider of stylish cameo moments – it was hard to function as anything more significant when so physically out of shape and showing little appetite for training.

His Vasas contract expired in 1972 and by then management and teammates alike had long grown tired of the unprofessional behaviour of both Farkas and Mészöly. Farkas played some matches over the next couple of seasons for local sides, but his top-level career was effectively over at the age of just 30. During his Vasas career he played 219 League games and scored 169 goals, winning 4 Hungarian titles and 4 Mitropa Cups. He earned an unremarkable 33 caps for his country and does not even make the top 50 list for the highest number of national appearances. Those 33 caps yielded 19 international goals. 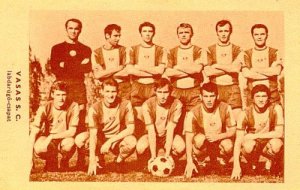 Life after football was not kind to János Farkas. For a number of years he ran a bar on the main road leading to Budapest’s Ferihegyi Airport, but attempts to lead a normal life were blighted by his struggles with health issues. Farkas suffered a premature death from a heart attack at the age of just 47. A minute’s silence was observed at every Hungarian football ground on the weekend following his death and his funeral was attended by many of his old club and national teammates. His life-long friend Kálmán Mészöly was one of the coffin bearers.

Farkas played in an age and for a nation with a proud history of elegant and elaborate footballers. While his international contemporaries were often players for whom taking a lot of touches of the ball was a way to express themselves and showcase their skills, Farkas brought a different dynamic to his teams. Perhaps less elegant in possession and more direct than some, taking touches of the ball for him was merely the process he needed to go through in order to manufacture a position to best utilise his right foot cannon of a shot. If that could be achieved with as few touches as possible, then all the better. He was a player with a mindset geared towards functionality rather than pure aesthetics. Whilst perhaps not directly comparable in terms of overall quality, there are undoubted similarities in the style of Farkas and modern-day Cristiano Ronaldo. The Dane, Brian Laudrup, is another modern reference point .

Pure speculation of course, but if János Farkas was alive and playing football today BTLM would wager that his intelligence and counter-attack friendly skills would adapt well to the modern game – if you could keep him out of night clubs for long enough of course.

Click below to see Farkas’s famous goal against Brazil and other Magyar footage at Hungary On Film.