The Lost Champions of Northern Ireland is almost exclusively the story of one major club, Belfast Celtic, the 14-time champion of the province in the first half of the last century.

Founded in 1891 and initially called simply Celtic, the Belfast prefix was added a decade later. A first title arrived in 1900 after a closely fought campaign in which fierce rivals Linfield were edged out by a point. As a portent of what was to come, political violence in the province led to the club withdrawing from the League between 1920 and 1924. Belfast Celtic returned as if they had never been away winning four straight championships between 1926 and 1929. The club’s distinguished history came to a harsh and ugly end in the aftermath of an unruly 1948 League game against Linfield.

During a chaotic pitch invasion several Celtic players were attacked and centre forward Jimmy Jones suffered a broken leg. The club withdrew from the League shortly after and although its resignation was expected to be a temporary one again, Belfast Celtic sold off its players and never returned. Sixty-six years after dropping out of the game this long-extinct club remains Northern Ireland’s third most successful in championship wins. 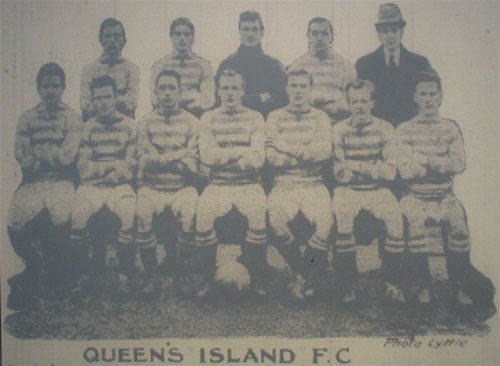 Casting a more modest shadow over Belfast football history are the 1924 champions, Queen’s Island. This club was in essence a shipyard works team and at times fielded elevens composed entirely of Scotsmen. It spent just eight seasons in senior football before being voted out of the League in 1929. Queen’s continued in the junior Leagues until disappearing in the 1960s.