The story of European club football’s second most coveted prize is one of invention and re-invention; each iteration adding or stripping away varying degrees of its worth. It’s probably entirely reasonable to suggest that the Europa League – as we know it now – has lost a lot of the prestige that was attached to it under its former guise, the UEFA Cup; and even then, that venerable old competition had also become devalued following the creation and gluttonous expansion of the all-consuming Champions League during the 1990’s and early 2000’s.

The UEFA Cup’s heyday came, undoubtedly, during the 70’s and 80’s when only the champions of each country entered the European Cup. This meant that several sides from each country could qualify for the supposed poor relation, when, in fact, this gave the competition a strength in depth  the premier tournament couldn’t match. It was feasible – given lucky draws – that a club like Liverpool, Real Madrid or Bayern Munich could sail through to the quarter or even semi-finals of the European Cup while those taking part in the UEFA Cup could expect stiff opposition right from the off, making it much more of a challenge; especially when you consider that for much of its existence, the finals were two-legged affairs.

It wasn’t always thus, however.

The UEFA Cup’s predecessor – the Inter Cities Fairs Cup – was a rather curious creature. The brainchild of Ernst Thommen, Ottorino Barassi and Sir Stanley Rous (all three would eventually become leading officials at FIFA), the Fairs Cup, as it became known, was set up to comprise of teams that hailed from various European cities that regularly held trade fairs (hence the name) and would be strictly limited to one club per city. It was also unsanctioned by UEFA themselves until its replacement by the UEFA Cup in 1971. Qualification criteria – until 1968 when rules were altered – was further muddied by the fact that respective league positions were largely ignored. Just like its glamorous sibling the European Champions Cup, the Fairs Cup was born in 1955 although, bizarrely, it took three whole years before its first final was held.

Just like its modern day reincarnation, the Fairs Cup began with a group phase consisting of teams from Basle, Birmingham, Copenhagen, Frankfurt, Vienna, Cologne, Lausanne, Leipzig, Milan, and Zagreb. Some of those teams – including eventual finalists Barcelona and a London XI were representative sides rather than specified clubs; although the Barcelona team were made up primarily of players from FC Barcelona with just one coming from the city’s other major club, Espanyol, while the London team was a hotch-potch of men taken from 11 different clubs in the English capital.

Having both come through their groups with relative ease, the semi-finals were somewhat trickier; London just scraped past Lausanne – overturning a first leg deficit in the second at Stamford Bridge – while Barcelona and Birmingham City couldn’t be separated on aggregate after two goal-laden legs. The Catalans would eventually win through thanks to a late goal in a one-off replay scored by legendary Hungarian-born striker László Kubala. 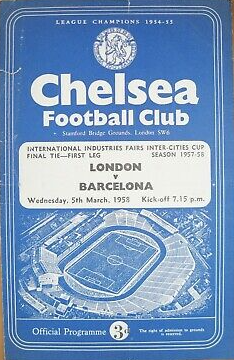 The first leg of the final took place at Stamford Bridge on March 5th 1958. London’s manager was Joe Mears – chairman of the host club, Chelsea. He later became head of the FA in 1963 and was instrumental in England’s successful bid to host the 1966 World Cup. Despite being a central figure in the Jules Rimet trophy’s theft, ransom and recovery in the build up to that tournament, he died of a heart attack just two weeks before the opening game at Wembley. Mears included the young Chelsea goal machine Jimmy Greaves alongside his future Tottenham Hotspur colleagues and double winners, Bobby Smith and Danny Blanchflower. Also turning out for London was Fulham legend Johnny Haynes – three years before he became the first player to be paid £100-a-week after the abolition of the maximum wage in English football.

Despite home advantage, the London XI were matched by the more cohesive and familiar Spanish side; Paraguayan striker Eulogio Martinez put Barcelona ahead inside 10 minutes only for 18-year-old Greaves to hit back for the hosts almost immediately. Justo Tejada restored the visitors’ lead before half time.

With just two minutes remaining, London won a penalty. Fulham full back Jim Langley dispatched the resultant spot kick to restore parity and give the English side a fighting chance for the second leg eight weeks later.

The Catalans burst out of the traps just as they had in London and ended the tie as a contest inside the first 10 minutes ; Barcelona’s classy forward Luis Suarez (the world’s most expensive footballer in 1961 when he moved to Inter for 250 million Italian liras) blasted home twice to open up a 4-2 aggregate lead. Legendary coach Helenio Herrera had replaced Domènec Balmanya in the dugout; the Argentine manager’s side opened up Milne’s men with regularity, increasing their lead just before the break through Martinez.

The second period continued in much the same vain; Brazilian Evaristo notched twice, sandwiching a strike by Martí Vergés giving Barcelona a convincing 6-0 victory on the night and an 8-2 win overall.

The rather convoluted format of the Inter-Cities Fairs Cup – which had begun on Christmas Day 1955  for the eventual victors with a 6-2 success over Danish representative side Stævnet – was altered to a two-legged knockout competition the following season but still took two years to complete; Barcelona retaining the trophy with a 4-1 aggregate triumph at the expense of another English side, Birmingham City.

Mark was the founder of the FBA nominated Football Pink site. You can find him these days on Twitter @thatmarkgodfrey