These are the words of Bernard ‘Bajdo’ Vukas – which can be seen engraved upon his tombstone – whose name is equally revered by those who never saw him play just as much as by those that did. Born on May 1st 1927 in the Trešnjevci district of Zagreb, in what was then the Kingdom of Yugoslavia, Vukas’ early life saw him eventually grow up to be a Dinamo Zagreb supporter. This was in no small part down to the intervention of his father, Vinko, who it is said, took his belt to his 10-year-old ‘fakin’ or ‘urchin’ son for daring to follow Partizan Belgrade instead.

His aptitude for the game was spotted early on, and in 1938, aged 11, ‘Bajdo’ was recruited by HŠK Concordia where his development continued alongside some of the pioneers of post-war Yugoslav football. Concordia won the Croatian championship in 1942 but were dissolved in 1945 which led to Vukas moving on to play for NK Zagreb in a regional Croatian league until 1947. But it would be his next move to Hajduk Split that would lay the foundations of his immortalisation in the annals of Croatian sporting history. 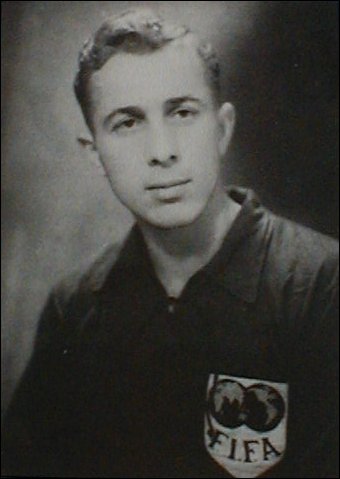 Before he settled on the picturesque Dalmatian coast, the coaches from his boyhood heroes Dinamo, who were not oblivious to the blossoming talents of the slightly-built youngster, invited Vukas on a tour of Bulgaria, and although he scored for his beloved Blues in a friendly match, they surprisingly decided not to sign him up. Hajduk legend, Frane Matošić, took advantage of Dinamo’s mistake and smuggled Vukas in clandestine fashion by train to Split to play in some friendlies. Professionalism was outlawed by the Communist authorities and Hajduk could have found themselves in significant trouble had they been caught moving Vukas to Split just for the purposes of playing football. Vukas appeared in the friendlies listed rather suspiciously as ‘young left winger’.

Bajdo’s impact in Split was immediate. His new club improved from their previous year’s final placing of fourth to a runners-up finish in 1947-48. Off the pitch however, Vukas felt like something of an outsider initially and was considered somewhat middle class in the more proletarian surroundings of Split. He once said, “I had a feeling they didn’t approve of my manners. If I hadn’t been really good, I doubt they would have ever accepted me.”

The form Vukas displayed that first season earned him a call-up to the Yugoslavian squad for the first post-war Olympics in London. Vukas failed to make the starting eleven for any of the competition’s early rounds including the semi-final victory against the hosts Great Britain, who were managed by Manchester United boss, Matt Busby.

Vukas would make his one and only appearance at the 1948 games in the final at Wembley Stadium, replacing the Yugoslavian League’s top scorer, Franjo Wolfl, in the line-up. However, there would be no fairytale ending for the Yugoslavs as they were defeated 3-1 by the excellent Swedish team of Gunnar Gren and Niels Liedholm who were managed by Englishman, George Raynor. For Bajdo, the silver medal won in London was just the beginning and would be the first of many accolades achieved over the following prize-laden decade.

Two years after the London Olympics, Vukas was an integral member of the Hajduk team that went through the entire 1949-50 season unbeaten en route to winning the club’s third national title, a feat unequalled either before or since. He was called up again for national team duty that summer when Yugoslavia participated in the first FIFA World Cup to take place after the Second World War. Following two impressive group stage victories, Vukas and his colleagues were eliminated after losing to hosts, Brazil, in their third group game. With just one country to advance from each group to the final round-robin phase, the classy Yugoslavs departed early from South America alongside the likes of Italy and England.

By 1952, Hajduk, Yugoslavia and Vukas were really beginning to make their name in world football. For ‘Bajdo’, another league championship was secured at club level and representative honours were gained yet again, this time at the summer Olympics in Helsinki, Finland. The 1952 games are famous for the birth of Hungary’s ‘Mighty Magyars’ of Puskas, Kocsis, Hidegkuti and Czibor, but Yugoslavia were a match for anyone with their own stars Beara, Bobek, Čajkovski and of course, Vukas, whose creativity and exquisite dribbling skills were at the heart of their attacking force. By this time, not only had Vukas begun to attract acclaim both at home and abroad, but he acquired the nickname ‘Žuti Pes’ or ‘Yellow Dog’ possibly given to him by Hajduk’s newly formed supporter group, Torcida.

In the preliminary round, Yugoslavia faced India, who had chosen to play the game without boots. Unsurprisingly, the Europeans ran amok against their witless opponents and recorded a 10-1 victory; ‘Bajdo’ contributing two of his side’s goals. Their first round game against the Soviet Union would turn out to be even more dramatic. After barely an hour of play, Vukas and co. led 5-1 only to be stung by an incredible Soviet comeback. Four goals in the last 15 minutes sent the game to extra time and eventually a replay, which the Yugoslavs won 3-1.

Vukas scored in Yugoslavia’s 5-3 win over Denmark in the quarter-final and he was again instrumental in the semi-final victory against Germany. This set up a fascinating gold medal match with their fellow competitors from behind the ‘Iron Curtain’, Hungary. The Hungarian side was virtually the same as the one that would devastate England at Wembley, 6-3 in 1953, and the same team that would enter the 1954 World Cup as the favourites before losing to West Germany in the final, 3-2, in the match dubbed ‘the Miracle of Bern’. Despite Yugoslavia’s undoubted quality, they lost no shame in defeat and had to settle for their second successive Olympic silver medal, losing 2-0 to late goals by Puskas and Czibor.

The following year, Vukas earned even greater personal recognition on the global stage when he was invited to play for a FIFA Rest of the World XI against England, again at Wembley, where he had won the first of his two Olympic silver medals. The match was arranged as a celebration of the 90th year of the English Football Association and he was chosen along with his Yugoslavian contemporaries Branko Zebec, Vladimir Beara and Zlatko Čajkovski in a side that also included Sweden’s Gunnar Nordahl , Austrian Gerhardt Hannappi and the Czech, Ladislav Kubala. The great Ferenc Puskas could only make the substitutes bench, but ‘The Galloping Major’ would return to Wembley just a month later to wreak havoc for Hungary in the aforementioned rout of the Three Lions.

Vukas starred for the Rest of the World, creating two goals and earning a penalty in an exciting 4-4 draw – England’s Alf Ramsey scored a last minute equaliser.

A year earlier in Yugoslavia, another 4-4 draw remains part of Vukas folklore. Hajduk were losing 4-0 to Lokomotiva at half time and an enraged Vukas tore into his team mates – including his mentor Matošić – in the dressing room. Vukas led his team’s comeback with a hat-trick and an assist in the second half, earning the club a draw from the most impossible of positions. It is this incredible determination and fighting spirit that gave birth to Vukas’ enduring endearment to the Croatian public.

Vukas featured for Yugoslavia in another World Cup finals in 1954, losing to winners West Germany in the quarter-final. He returned to the United Kingdom for another of his finest moments in 1955 – the year he won his third and final national championship and topped the Yugoslavian goalscoring charts – as part of a UEFA XI that took on a Great Britain select team at Windsor Park, Belfast. The game was to commemorate the 75th anniversary of the Irish Football Association. Vukas won another Man-of-the-Match award for his performance after scoring a hat trick in the 4-1 win for the UEFA side.

In 1957, Vukas was lured to Italy, transferring to Bologna. Unfortunately his two year stint in Serie A was disrupted by illness and having been limited to just 45 appearances and two goals, Vukas returned home to Hajduk. He had also fallen out of favour with the national squad and after 1957 he failed to add to his 59 international caps and 22 goals. The second spell with Hajduk lasted four years but never reached the heights of his heyday in the early 1950’s. Now well into his thirties, Vukas tried his hand in Austrian football between 1963 and 1967 with Grazer AK, Kapfenberger SV and Klagenfurt, all with limited success. After one final season at Hajduk, Vukas finally hung up his boots in 1968, aged 41.

After his football career ended, Vukas returned to live in Zagreb where he sparred amiably with friends, colleagues and journalists about the rivalry between Hajduk and Dinamo but such was the admiration for Vukas in Croatia’s biggest two cities, that he has streets named after him in each.

Even after his death in 1983, aged just 55-years-old, his legend lives on. Renowned not only for his extraordinary skill and dribbling ability, his never-say-die approach won the respect of a nation and in two separate polls in 2000, he was voted Croatia’s greatest footballer by the national association and the country’s greatest ever athlete by Večernji List, Croatia’s leading daily newspaper – impressive considering the competition that went before and after independence.

Debate rages in Croatia today as to whether Vukas would be suited to the physically demanding and overtly tactical football of modern times, but many agree that his prodigious vision, skill and technique allied to his voracious winning mentality could see him succeed in any era. Comparisons have even been made to a certain Lionel Messi. Not bad for an ‘urchin’ from the back streets of Zagreb.

Mark was the founder of the FBA nominated Football Pink site. You can find him these days on Twitter @thatmarkgodfrey