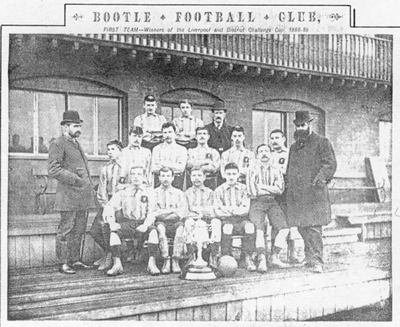 Bootle is situated to the north of the boundary with the City of Liverpool. What many people do not know is that Bootle was once the home of a Football League club. They played in the original Merseyside Derby; and if fate had smiled more kindly on Bootle FC then they, and not Liverpool, would be still be playing Everton for bragging rights in the city.

Like many clubs in the 1870s Bootle started life as a church team and were known as Bootle St.Johns. In 1880, a soccer enthusiast called Robert E. Lythgoe moved to Merseyside from North Wales and soon set about the task of forming his own club. He was able to persuade Bootle St.John’s to become more ambitious in their outlook, changing their name in the process.

Bootle and Everton quickly established themselves as the top two sides in the area and became fierce rivals. During one of their meetings in 1881, the game was abandoned after a pitch invasion by feuding fans. Bootle and Everton would often clash in the Liverpool Senior Cup during the 1880s and attendances swelled. Bootle were now playing at Hawthorne Road, which survives today as the home of Bootle Cricket Club. In October 1886, Bootle drew a crowd of 10,000 when they played Everton in the Liverpool Senior Cup. When they met again the following year a crowd of 11,000 attended the game at Everton’s home ground, Anfield.

By the time Bootle had won the Liverpool Senior Cup for the second time at the end of the 1887-88 season, twelve clubs from the North West and Midlands had agreed to take the giant step of forming the Football League for the following season. Bootle felt that they had a stronger case to be founder members than Everton. At the time, they were arguably the more successful team. However, Everton were chosen instead.

One year later, the clubs who had missed out on Football League membership organised themselves to form the Football Alliance. Bootle were one of the founder members alongside Birmingham St.Georges, Crewe Alexandra, Darwen, Grimsby Town, Long Eaton Rangers, Newton Heath, Nottingham Forest, Small Heath, Sunderland Albion, The Wednesday and Walsall Town Swifts. The Football Alliance was regarded as the unofficial Second Division of the Football League. Bootle performed reasonably well in the new league, finishing second on two occasions.

The summer of 1892 was to prove eventful for Bootle and for football on Merseyside. The Football League decided to create a Second Division, formed mainly from teams from the Football Alliance. To Bootle’s great delight, they were one of the founder members. However, Everton had been in dispute with their landlord John Houlding and decided to leave Anfield for a new ground at Mere Park, better known as Goodison Park. Houlding resolved the problem of filling an empty stadium by creating a new club – Liverpool – and they entered the Lancashire League for the 1892/93 season. Just as Bootle were to commence their league career, a rival had appeared on their doorstep.

Bootle’s poor form in the last season of the Alliance led to poor attendances and mounting debt. This continued in the Football League. Despite several new signings, they lost their first game away at Ardwick, 7-0. After eleven games, Bootle had gained just four points. Such dismal returns prompted fans to watch either Everton or Liverpool instead. The club was also dealing with incidents of player indiscipline which resulted in four being dismissed. However, with the signing of Hope Robertson from Everton, results improved. Darwen were beaten 5-1 and Walsall Town Swifts 7-1, their best ever league win. Their last ever fixture was a 4-1 home win over Lincoln City, watched by a crowd of only 1,000. They had earned the right to remain in the League but would the finances allow it?

The directors of Bootle decided that they could not compete with Everton and Liverpool. In a surprising move, they handed in their resignation to the Football League and disbanded the club altogether. Bootle had suffered a quick financial death and ironically their place in the Second Division was now taken by Liverpool. The Bootle vs. Everton Derby matches would be no more.

Bootle’s short league career did leave them with an unwanted legacy. They and Middlesbrough Ironopolis share the record of only spending one season in the league. However, Bootle’s 22 games and 19 points are the lowest totals achieved by any club in a Football League career.

It is always interesting to speculate on “what might have been”. If the Everton/ Liverpool split had not come about then it is possible that Bootle might have gone on to become a footballing force and Liverpool may never have come into existence.

Bootle’s fate was summed up by a sportswriter in the Liver newspaper at the start of the 1893/94 season.

“Alas. Poor Bootle. The absence of the old North Enders and doings leaves an aching void in the heart of the old time Scribe, whose want it has been to hold forth year after year concerning them.”

PAUL REVIEWED BOOKS FOR THE FOOTBALL PINK AND WRITES FOR TALES FROM THE TOP FLIGHT AND BY FAR THE GREATEST TEAM. FOLLOW HIM ON TWITTER @paulmcparlan