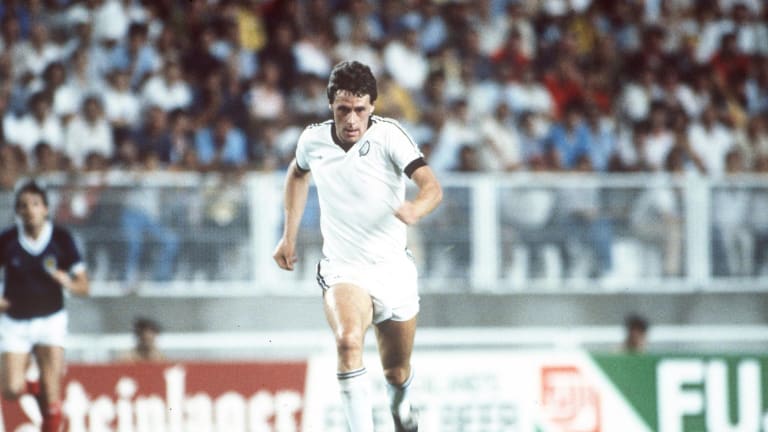 Sam Malcolmson is not a name that will trigger memories in even the most ardent fans of Scottish football from the 1970s. The defender, who often played as a striker, hadn’t exactly set the heather alight in his homeland, playing just 34 times for Airdrie, Queen of the South and Albion Rovers between 1971 and 1974. His was clearly a career going nowhere fast.

But in the summer of 1982 Malcolmson was lining up against his native Scotland in the World Cup in Spain, having helped New Zealand qualify from a marathon campaign spanning 15 games and several continents with trips as far afield as China and Saudi Arabia. He typified the bulwark of the squad that fought courageously and defied the odds to give New Zealand its first-ever World Cup appearance: a battling journeyman from the British Isles now playing in front of minuscule crowds in his adopted homeland.

As well as Malcolmson, Allan Boath and Adrian Elrick were also All Whites players who lined up against the Scots at La Roselada Stadium in Malaga familiar with the strains of Scotland the Brave. Midfielder Boath was a product of Celtic’s youth system but failed to progress much further. He would go on to play 39 times for New Zealand between 1980 and 1988, including all three encounters in Spain; not bad for someone whose Scottish League appearances were limited to the 15 games he played in Forfar Athletic’s colours during the 1977-78 season. Aberdonian defender Elrick’s footballing life barely even started in Scotland before his family moved to New Zealand and he spent most of his time with North Shore United in Auckland. Still, he made his international debut against China in 1975 and over the next nine years gained 53 caps. Elrick would also play in all three of New Zealand’s games in Spain.

For Malcolmson, the trigger to escaping lower league mediocrity and bitterly cold Scottish winters was watching the 1974 Commonwealth Games in summery Christchurch with his wife Ann. There and then the couple decided to make the move Down Under. Malcolmson made an immediate impression, firstly in Wellington, then Auckland. He would soon be picked for New Zealand, in 1976 against Burma, the first of 37 appearances he would make for his new country. The final one was that encounter with Scotland.

The three Scots were typical of the 22-man squad that made the arduous journey to Iberia. In defender Dave Bright, here was someone who failed to even get signed up for a Football League team in England, spending his career at Kent non-league outfits such as Faversham Town and Ramsgate Athletic. Bobby Almond was a part of the Leyton Orient and Spurs youth setups, but only saw first-team football with Walthamstow Avenue in the Isthmian League; Birkenhead-born Steve Wooddin began his career at Tranmere Rovers but graced the first team just three times; Steve Sumner was an apprentice at Blackpool and also part of the Preston North End youth team; and midfielder Billy McClure made a handful of appearances for Liverpool under Bob Paisley and also played in Iran before finding his way to Auckland. Irishman John Hill was a stalwart with Glentoran and part of the Irish Cup-winning side of 1973. Oh, and the manager John Adshead and his wingman Kevin Fallon both hailed from England. That totalled 11 of the 24 players and coaches hailing from the old country.

But if this sounds like a bunch of misfits coming together through a dearth of local talent, it needs to be noted that those journeymen seemed to become different players in the all white of New Zealand. Sumner scored nine times in qualifying, including the crucial third against Australia and six against hapless Fiji. Wooddin netted eight times during the campaign and scored the second in the final play-off match against China. Both scored against Scotland, and both played all three games in Spain.

Surprisingly, there was one Scot who failed to make the squad for the finals, despite being the one who actually had a decent career in his homeland. Goalkeeper Sandy Davie was a regular for Dundee United having appeared in both legs of the club’s famous Fairs Cup victory over Barcelona in 1966 and the 1974 Scottish Cup final against Celtic. At the age of 28 he emigrated, gaining an international call-up in 1979 against Fiji but not getting a sniff in the famous ’81 qualifying campaign.

The long and winding road to Spain

Victories in friendly matches against Australia (1-0) in 1979 and Mexico (4-0) and South Korea (1-0) the next year suggested that New Zealand might finally have a side capable of taking on the best in Oceania and Asia. Adshead and Fallon brought together a talented, hard-working squad that included the experienced Brian Turner and younger players such as Grant Turner, Duncan Cole and teenager Ricki Herbert, later of Wolves.

The marathon campaign began on Anzac Day 1981 with a hard-fought 3–3 draw with Australia in Auckland. It was suspected that the Aussies were saving something for the return leg, but, at the Sydney Cricket Ground a month later, the Aussies were no match for the gallant visitors who secured a stunning 2-0 win.

New Zealand easily saw off Fiji (including a 13-0 thrashing), Indonesia and, at home, Chinese Taipei, with a frustrating, scoreless draw on a sub-standard pitch in Taiwan being the only blip in those matches. In those eight initial fixtures, the Kiwis scored 31 goals and conceded just three. With rugby’s reputation tarnished by that winter’s divisive Springbok tour, it was the All Whites capturing the imagination of the sporting public.

That was the relatively easy part; China, Saudi Arabia and a Kuwait side coached by Carlos Alberto Parreira awaited them in the next stage. They began with a 0–0 draw in Beijing, then beat the Chinese 1–0 in Auckland, thanks to a header from Herbert. On the 10th October, the All Whites slumped to a 2–1 defeat against Kuwait in a match marred by controversial refereeing decisions and crowd trouble. A disappointing 2–2 home draw with Saudi Arabia the following month effectively meant New Zealand had to win its last two games to stay in contention.

In Kuwait, goals from Sumner and teenager Wynton Rufer looked to have secured a 2–1 victory, but the home team cruelly equalised in the final minute. They now had to beat Saudi Arabia by six clear goals in Riyadh to climb above China on goal difference. In the searing afternoon heat on an artificial pitch, New Zealand swept to a stunning 5-0 lead by half-time with Brian Turner converting a vital penalty just before the break. The Saudis came close in the second spell – a solitary strike from the opposition was all that was needed to put the visitors out, but they held on.

New Zealand and China were now tied on points and goal difference. The twenty-fourth and final spot in Spain would be determined by a play-off in Singapore on the 10th January 1982. It was ostensibly a neutral venue, but the island-state had a large Chinese population and the 60,000 crowd was overwhelmingly pro-China in its support. Despite the sapping humidity, the All Whites went 2–0 up with goals from Wooddin and Wynton Rufer. China pulled a goal back but couldn’t find an equaliser – the New Zealanders had famously qualified after a tumultuous, marathon campaign.

Very little was expected of New Zealand in Spain, and even less was anticipated when the draw paired them with the Soviet Union, Brazil and Scotland, then littered with world-class stars such Kenny Dalglish, Joe Jordan and Graeme Souness. And this was even before influential midfielder Grant Turner was ruled out of the tournament after injuring himself in a practice match days before the opening game.

Against Scotland, Adshead dropped a bombshell by leaving out Richard Wilson, who had played in all 15 qualifying matches, leaving the keeper distraught, as well as talisman Brian Turner (who was unrelated to Grant). For New Zealand football fans raised on a diet of British football through TV shows such as Big League Soccer or publications such as Shoot, Scotland was a mouth-watering prospect in the first game in Malaga. But they were soon brought down to earth as Dalglish and John Wark (with two) opened up a 3–0 half-time lead. Then, remarkably, New Zealand shocked the Scots, pulling back two goals with strikes from Sumner and Wooddin. Scotland’s greater class told in the end as they pulled clear to a 5-2 win.

Their next opponents, the Soviet Union, featured former European footballer of the year Oleg Blokhin and several other world-class ‘amateurs’. New Zealand held their own in the first half, but paid for their creative limitations as Yuri Gavrilov netted to put the Soviets a goal ahead just before half-time. Blokhin and fellow Ukrainian Sergei Baltacha added further strikes to give the USSR a three-nil win.

In the glamour game against Brazil, Zico opened the scoring with an overhead kick and added a second in his side’s 4–0 victory. Elrick cheekily shadowed the Brazilian playmaker for the last few minutes to ensure he was the closest New Zealand player at the final whistle, thus enabling him to nab the Brazilian’s shirt. Adshead later described the Brazilian players as being from another world, and he wasn’t far off the mark.

While the New Zealanders left without a point, they had gained a lot of respect for their commitment and attitude. This was undoubtedly a good time to be a football supporter in New Zealand. In 1981 the country was torn apart by the Springboks rugby tour. Father argued with son, protesters fought with cops and rednecks, stadiums were invaded, towns brought to a standstill and the stench of hidden racism smelt rotten as the all-white South Africans made their way across the twin islands. For once, rugby didn’t seem to be the national pastime that stopped the nation in its tracks.

Now it seemed to be a force for those who denied politics and sport should ever collide and, on the other side, those fighting racism – both in their own country and in apartheid South Africa. There was blood on the streets. So, football seemed a sensible, and safer, option for a short time, and the All Whites provided some respite with their memorable run to a first-ever World Cup finals.

It wouldn’t be until 2010 when the nation got behind the All Whites again – and another Scot, Michael McGlinchey, had a hand in that run to South Africa. This time the unfancied Kiwis came home unbeaten after draws against Slovakia, Italy and Paraguay and unearthed a new talent in Winston Reid, who was soon snapped up by West Ham.

Like the players he has written about, Craig Stephen is an ex-pat, having lived in Montrose and eastern England until moving to New Zealand in 2005 where he writes about music and football and the legal system. He is a Wellington Phoenix supporter and Montrose FC sympathiser.

One thought on “1982 And All That: New Zealand’s World Cup Odyssey”