At 2 am on the morning of October 12th, 1984, then U.K. Prime Minister Margaret Thatcher and her husband Denis left the Tory revellers in the ballroom of the Grand Hotel, Brighton, to return to their room. Within fifty-four minutes, an incendiary device in room 629 ripped through the hotel turning the flowing champagne into flowing blood; the IRA had struck at its number one target. Within a year the ‘Iron Lady,’ who had turned a blind eye to the deaths of ten hunger strikers and ripped the heart out of the mining industry in northern England, sat side by side with Irish Taoiseach Garret Fitzgerald. On November 15th 1985, at Hillsborough Castle in the heart of Unionist Ulster, the Anglo-Irish agreement was signed.

That same week against the backdrop of those political negotiations, the Northern Ireland football team and its followers were making their way to Wembley for a crunch World Cup qualifier against England. Northern Ireland had been drawn in Group Three with group favourites England, Romania inspired by an upcoming star in Gheorghe Hagi and minnows Finland and Turkey.

In May 1984, as dockers and railway workers joined striking miners and their families to march through Mansfield, the Northern Ireland team was Helsinki bound to begin its campaign. ‘An easy starter…’ was the headline in the Belfast Telegraph, but it turned into a nightmare against the part-timers at the Porin stadium. On a bumpy pitch in the Scandinavian sunshine, Billy Bingham’s men were listless as Ari Valvee sneaked in behind Mal Donaghy in the fifty-fifth minute and scuffed a shot past Pat Jennings.

By September, the ghosts of ‘Soumi’ had been banished as the Irish roasted the Romanians in the cauldron of Windsor Park. A 3-2 victory, including goals from teenager Norman Whiteside and future Republic of Ireland boss Martin O’Neill, propelled the North up the table.

Back on track, November spawned the giant-killing Finnish monster in Belfast and revenge was in the air. Mika Liponen, then a trialist at Southampton, fired the Finns ahead after 21 minutes and the scribe of all Belfast scribes – Malcolm Brodie – watched from the press box in disbelief. Current BBC NI commentator John O’Neill headed an equaliser and Gerry Armstrong, the man who had scored the 100th World Cup goal and broke Spanish hearts at Espana ‘82, converted the winner from the penalty spot.

As a New Year dawned and the carnage continued in the province, Billy Bingham was licking his lips ahead of a February date with the three lions of England. That same week future Nobel peace winner and then SDLP leader John Hume announced he was meeting with the IRA to talk peace – the Hume/Adams talks with the help of the late Fr. Alec Reid, in later years, would be a catalyst for peace in Ireland.

Back on the football pitch in South Belfast, a frenzied dogfight between the arch-rivals was dominated by Northern Ireland. However, it wasn’t to be; after hitting the woodwork twice and with Pat Jennings hardly having to make a save, Mark Hateley, then emulating the great Jimmy Greaves in starring upfront for AC Milan, snatched a winner with thirteen minutes left.

The team got back on track with a two-nil victory over Turkey, a brace from the most famous son of the Shankill Road – Whiteside, as Jennings celebrated 110 caps. In the return match, the Irish struggled in Ankara: Bingham put it down to the marathon trip, a delay with the airline meant the journey took over eleven hours before they finally arrived at their hotel reception.

By October ‘85, as James Molyneaux and Ian Paisley in a show of pan-Unionist strength told the Iron Lady in the confines of No. 10 ‘It’ll be like 1913 all over again…’ as talks continued towards the Anglo-Irish Agreement; it was also a case of do or die for the footballers in Romania.

As Henning Lund-Sorenson of Denmark put his whistle to his lips on a cold Bucharest afternoon, Northern Ireland rolled back the years. The men in green spent most of the ninety minutes with their backs against the wall and Jennings – beating Italian Dino Zoff’s caps record in this game – made save after save. Just in front of him a young, blonde-haired centre-half named Alan McDonald made his competitive bow with a towering performance.

In the twenty-eight minute, Sammy McIlroy picked up the ball and went on a mazy dribble past three Romanian defenders; he slipped in Jimmy Quinn of Blackburn Rovers who scored to send the watching hordes in Belfast jumping from their TV armchairs. Quinn’s family had left the Rathcoole estate on the outskirts of Belfast for the sanctuary of Wiltshire as the troubles brewed in 1971; his goal meant all roads led to Wembley with now just a draw needed.

In a week when all eyes were on the village of  Hillsborough, fifteen thousand Irishmen headed for the twin towers. One of those men was Jim Rainey, a north Belfast native who left by ferry for Stranraer before making the long car journey to the English capital. In future years, he would help transform Windsor Park from a place of bedecked Union Jacks and sectarian chanting to the green and white army and humorous songs such as ‘We’re Not Brazil…’. For his efforts Jim would later receive an MBE.

However on that autumnal night, all roads led to Mexico as the air was filled with talk about match-fixing and an old pals act. From the kick-off Northern Ireland battled as if their lives depended on the result; Jennings was again the hero of the hour while the young McDonald and John O’Neill dominated in defence. The in-form Chelsea striker Kerry Dixon failed to live up to his billing as he and Gary Lineker fired blanks on the night. Jim remembers chants of ‘Kerry Dixon You’re a w**k**, You’re a w**k**’ each time he missed while the England fans responded with ‘Its a fix, its a fix…’’

The closest England came in the first half was a strike from the majestic left foot of Glenn Hoddle which was tipped around the post by the cat-like Jennings. As the clock drew ever closer to the ninety, Gary Stevens curled a cross into the Irish box and for once the ball escaped the clutches of Jennings, but just as the ball looked destined for the net, McDonald lunged to clear for a corner.

On the touchline Billy Bingham was kicking every ball, perhaps recalling a past visit when he had scored the winner for Luton Town in the 1959 FA Cup semi-final to lead the Hatters to Wembley. They lost in the Final to Nottingham Forest, however, on this night, wee Billy from Belfast leapt in ecstasy as the final whistle blew: the dream had become a reality and this small province has earned back-to-back World Cup qualifications. 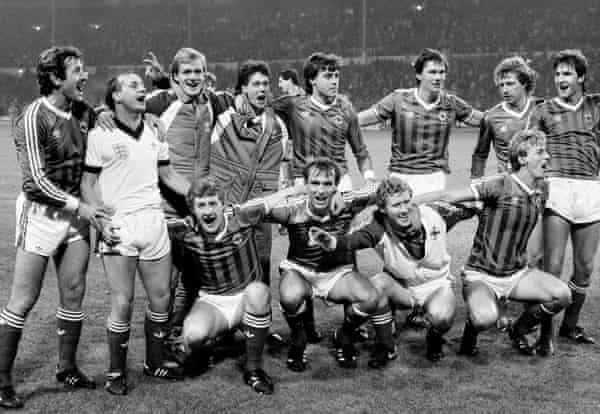 With the chant of ‘Northern Ireland, Northern Ireland…’ ringing around Wembley and the players celebrating, Bingham was approached by a suede-coated Tony Gubba of the BBC. He exclaimed: ‘We were anxious tonight…but we battled and fought like hell…’ Behind him, Jennings stood like the quiet man from Newry with Gubba yelling, ‘You can’t retire now Pat, you have a World Cup to star in..’ The forty-year-old just smiled.

The final word of the night went to the late Alan McDonald in response to the pre-match talk of match rigging. He told Gubba, with a finger firmly pointing to the camera and in a strong northern brogue: ‘Anybody who thinks that’s a fix can come and see me!’

Northern Ireland took their place at the thirteenth FIFA World Cup in Mexico and it would be a fitting swansong for many of that great squad. Tony Wilkes, a Dubliner, travelled with his father to the land of the Azteca for the festival of football and never came home. Among the football, he found romance and fell in love with the language, culture, and the Mexican passion for the beautiful game. A World Cup that’s remembered for the genius and the hand of a boy from Buenos Aires, Tony attended all of Northern Ireland’s games as they struggled to relive the heights of four years earlier.

Today Gerry Armstrong from his house in Hollywood, the Belfast one, talks to football guests on his weekly show. Recently, former teammate Jimmy Nicholl told how they’d managed to get a reptile from a local zoo back to their hotel in Mexico which attacked poor Billy Hamilton…. ‘Wouldn’t get away with it nowadays..’ Jimmy laughed.

For Pat Jennings, who had started his football in the GAA fields of Co. Down, it was the last hurrah after an international career that spanned two decades and 119 caps, fittingly against the samba boys of Brazil. In the Guadalajara heat, the safest pair of hands ever witnessed at Wembley said a tearful goodbye.