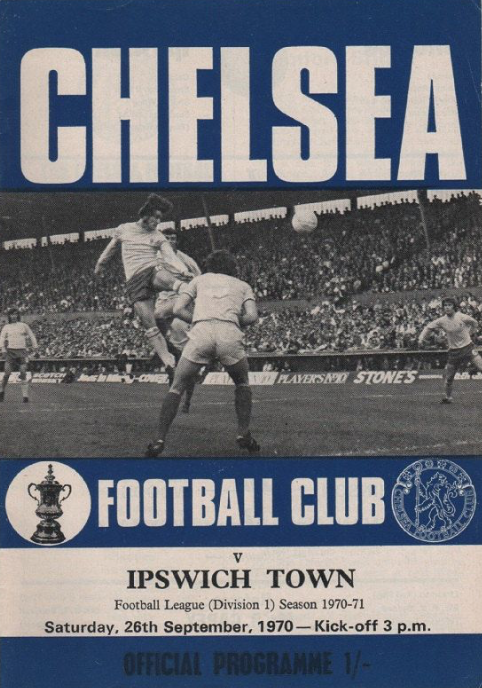 One of the most infamous incidents of the 1970-71 English season involved referee Ray Tinkler and an offside decision he didn’t give in a vital League game between Leeds United and West Bromwich Albion. West Brom scored as a result and the goal played a significant part in costing Leeds the game and eventually the title. That particular incident was merely the highest profile example of the many refereeing controversies that seemed to continually dog the game that season bringing much scrutiny to bear on match officials and their linesmen.

Looking back, Tinkler’s decision was probably correct and referees, then as now, were too often castigated as convenient scapegoats for failings or ignorance of the rules by players and managers. But then there was Roy Capey, a one-man refereeing disaster zone who almost single-handedly made a compelling case for referees deserving all the opprobrium directed at them. Capey was in charge of the Division One game between Chelsea and Ipswich Town at Stamford Bridge earlier that same season and he put in a performance so unremittingly awful that it was guaranteed to live long in the memory of all who attended, those who had bet on the game with Mobilebet voucher code 2019 or even just watched on Match Of The Day later that evening.

‘Downright poor’ was The Daily Mirror’s description of his first-half performance with questionable decisions seeming to go against both sides, and yet those would be quickly forgotten with the chaotic events after the interval. Midway through the second-half and with the home side leading 1-0, Chelsea’s Peter Houseman dribbled infield from the left-wing and set up Alan Hudson for a shot that crashed into the side netting. Houseman threw out his arms in frustration at the near miss and the Chelsea players turned to recover their positions for the goal kick. Then suddenly they realise that, bizarrely, the referee has awarded a goal. Hudson’s shot had quite obviously hit the rear stanchion and rebounded back into play, yet somehow it had managed to deceive the officials.

Ipswich’s manager Bobby Robson led a furious protest against the phantom goal, but despite consulting with his linesman Capey remained adamant that a goal had been scored and pointed towards the centre circle where the Chelsea players were standing with sheepish grins on their faces. Ipswich subsequently pulled back a goal that also should have been disallowed by the hapless referee. Awarded an indirect free kick, Jimmy Robertson aimed a cross into the penalty area and watched it elude defender and forward alike and sail into the net. No player had touched the ball meaning the goal was scored directly from an indirectly awarded free-kick.

Roy Capey had one more telling contribution to make to this game, a call straight from the Clive Thomas School of Unnecessary Pedantry. During injury time Chelsea’s Ian Hutchinson broke through unchallenged on the Ipswich goal. In the split second between the striker successfully rounding Ipswich keeper David Best and stroking the ball into the empty net, Capey decided that was the precise moment that the game must end and blew his whistle for full-time.

The Stamford Bridge stadium announcer captured the general sense of bewilderment when he broadcasted: “As far as we know Chelsea won 2-1.” Capey was no refereeing rookie fumbling his First Division lines, he had been a Grade One referee since 1967 and would continue as a regular for the next seven years. It was just one of those bad days in what was one of those bad seasons when top-flight English players and officials were rarely on the same wavelength.

2 thoughts on “A Bad Day For Officialdom at Stamford Bridge, 1970”