March 2013: the earliest days of a Balkan spring and we were meandering down a village road that followed the flow of the Danube near the city of Novi Sad. At the forefront of my mind was a football game from 1999 when a Federal Republic of Yugoslavia team led by Vujadin Boškov managed a 2-2 draw away from home against the powerful Croatia team of the time.  This fine result brought the reward of qualification for the 2000 European Championships.

Early goals from Predrag Mijatović and Dejan Stanković silenced 40,000 passionate home fans and disappointed the watching Croatian president Franjo Tudjman in the VIP box of the Maksimir stadium in Zagreb. With ethnic tensions still high just two years after the formal end of the of the war between the FRY and Croatia, Boškov was the perfect diplomat. He surprised dozens of Croatian journalists before the game by simply smiling at every attempt to provoke him at the press conference and batting them back with platitudes: “I’m thrilled to be in Zagreb again, this is such an adorable city!”

His informality and distinctive irony-laced sense of humour was crucial for dissolving the pressure mounting on his players and ever since that night I had wanted to shake his hand and explain him how much it meant for all of us Serbs. And now, finally, only days before a crucial qualifier for the 2014 FIFA World Cup between Croatia and Serbia at that very same Maksimir stadium, I was there. After years of complete public isolation and no Boškov pronouncements of any kind, we were standing at the door of his home. His wife Jelena, whom I met earlier, showed me a newspaper archive she had been assembling through the years with a special section of it dedicated to that Maksimir fixture.

“Vujke is upstairs“, she explained. “He has been battling with Alzheimer’s disease for years and now barely speaks at all.  A few days ago, while the Croatian manager Igor Štimac was talking about tomorrows game, Vujke was so annoyed that I heard his voice for the first time for months! ‘Young man you better watch out; football’s justice can be very painful’ he stated.”

“Besides that, Vujke still watches Serie A, but is so disappointed with a quality of the Italian league in comparison with the time he was there,” added Mrs Boškov only a moment before he showed up on the stairs followed by his daughter Aleksandra.

There he was – our Vujke, Mr. Boškov, or simply Mister, as Francesco Totti and millions of Italians nicknamed him during the 90s. Laughing and shivering, he greeted me and sat in his armchair holding onto his wife who had stood alongside him since he was a young and promising player with FK Vojvodina Novi Sad back in the 1950s.

Boškov had been an influential midfielder who earned 57 caps for the Yugoslav national team. He was a member of a memorable side that won the silver medal at 1952 Olympics in Helsinki after overpowering the USSR in the first round, a fixture that represented so much more than any regular game because of the ongoing verbal conflict at the time between Tito and Stalin. Following a fourteen season-long tenure with FK Vojvodina, he moved to Sampdoria in Italy then wound down his playing career in Switzerland in 1964.

Later he returned to Novi Sad and became Vojvodina’s technical director with new ideas and methods that made his name as a true trailblazer in the Yugoslavian game. He established himself as an English-style manager many years before this sort of management style was known in the Balkans and within just two years his successful strategy pushed Vojvodina to a first-ever League championship in 1966. The following season’s European Cup campaign was an ideal place for a wider audience to appreciate Boškov’s ingeniousness. In the Second Round Vojvodina drew Atlético Madrid and with both teams winning their home legs by a two goal margin – and with no away goals rule existing at the time – a third match had to be played on a neutral ground.

Vujke was however so convinced in his team’s superiority that he suggested to the Spaniards that the crucial game should be played once again at the Manzanares stadium (later called the Vicente Calderon) in exchange for $25,000. His gamble proved to be more than justified – Vojvodina won 3-2 after trailing by two goals thanks to a magnificent performance by striker Silvester Takač who scored twice.

As Vojvodina’s starstruck fans started dreaming of European glory, Vujke’s keen sense of entrepreneurship woke them with an unwelcome start:  he immediately sold star man Takač to French club Rennes and used the proceeds to build floodlights for the forthcoming Quarter Final tie against Celtic. Even missing their star forward Vojvodina came so close to advancing, but ultimately fell short when a late header by Billy McNeill in the second leg put Celtic through. The Yugoslav fans comforted themselves they at least had ‘Takač’s Eyes`, the nickname given to the stadium lights that would be operational at their home ground for the next 37 years.

Boškov’s time in Vojvodina came to an end in 1971 as he grew increasingly weary of the politics around the club. A couple of veteran Novi Sad communist bureaucrats with very influential voices fought heavily against Vujke’s idea to build a training centre for young players. The coach was accused of trying to promote capitalism and for “using our youth to earn money”. Ironically, these officials did him a favour by helping trigger a new chapter in his management career further afield. His first stop was ADO Den Haag in the Netherlands.

His career abroad tended to follow the same pattern from country to country: start with a smaller club from the lower reaches of the top division or even the second tier and bide his time until his effectiveness attracted the attention of the country’s powerhouses. Thats how in the 1970s he went from ADO to Feyenoord in the Netherlands and from Real Zaragoza to Real Madrid in Spain, then in the 1980s from Ascoli to Sampdoria in Italy.

He was adept at gaining the trust of players and presidents while also managing to forge great relationships with press and public. When asked about a defeat suffered to a minnow by his Real Madrid side, Boškov hesitated for a few seconds like he was about to utter a dramatic response, then simply shrugged his shoulders and nonchalantly answered: “Pues, futbol es futbol” (‘Well, football is football’), and walked away smiling. That throwaway comment became so popular in Spain that a television show which would go on to air for years adopted it as its title. Boškov`s straightforward and sometimes quite direct thoughts became his trademark and went viral long before the advent of social networks.

“Offside is when the referee calls it.”

“Great player sees highways where others see only paths.”

“An incapable defender stays incapable even if he plays in zonal defense.”

“Better than Boškov are the ones who are above him in championship table.”

“He who doesnt shoot on goal, doesnt score either.”

“Your head is only good for that hair of yours.”

“I don`t need a diet. I lose 6.6 pounds every time I reach the Marrasi stadium.”

“Perdono (a player) could play only with my dog in my garden.”

Reading this selection of Boškov gnomisms might offer the impression that Vujke was harsh on his players, but the reality was that they loved him for his sincerity. The words of Gianluca Vialli demonstrate well how they saw him. “I’ll always remember him for his greatness, both as a manager and as a person. He thought of me as the son he never had. It was a true gift to work with him. He became immortal,“ concluded Vialli, whom Vujadin’s wife calls simply Luca and confirms that he was for Vujke much more than just another of the great football players he was fortunate enough to work with.

“Together they were so close to winning the European Cup title, in the last season before the establishing of the Champions League. That late powerful free-kick from Ronald Koeman at the Wembley stadium however spoilt the whole thing, but if anyone deserved that trophy more than Boškov for his commitment to football, passion for it and remarkable legacy – then it was Johan Cruyff and his Barcelona.”

Although he was already 61 years old in 1992 while taking Samp to that European Cup Final, Boškov continued to work in Serie A and still felt capable of producing something big. A lasting legacy he left the city of Rome was a hero who would define football in the capital for the remainder of the 20th and a substantial part of the 21st century so far.

One day in the spring of 1993 as manager of AS Roma he gave a debut to a devoted 17-year-old giallorossi fan named Francesco Totti. We could debate at length the achievments of Totti’s Roma during the 24 years he would be part of the club’s fabric, but no-one can diminish his importance and popularity in the history of the club and beyond.  That very same Totti said “Goodbye, Mister, and thank you for everything” when the news broke that Vujke died. 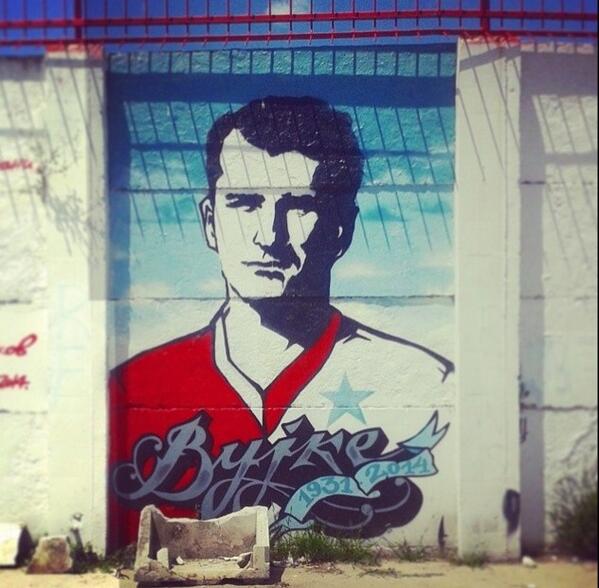 His eventual passing happened thirteen months after our encounter in Novi Sad.  The funeral at his hometown of Begeč, a small village near Novi Sad, brought the elite of European football to offer their condolences. Emilio Butrageño, Jose Antonio Camacho, Srećko Katanec, Dejan Savićеvić and many other greats came to pay their respects to this outstanding gentleman. But for one elderly grandmother, a neighbor of Boškov’s family that stood beside mе, those names meant little. Demonstrating a highly perceptive, if wholly accidental insight she concluded: “Its a shame that so few from Begeč came. I dont know who are all these guys in those sharp suits, but Vujke must had met them somewhere in the world. He was a quite good manager back in the days, you know.”