With bank debts estimated to be around £18 million, the financial strain on Tottenham Hotspur was a strong part of the reason why prized assets such as Paul Gascoigne and Gary Lineker were being linked with moves away from the North London club as 1991 drew to a close.

Gascoigne was linked to Lazio in Serie A for a mooted fee of £5.5 million with Benfica ready to step in if the deal was not completed. Spurs sought also to offload Lineker and his substantial wage to Japan while setting their eyes on Cup Winners Cup success; its £3m prize pot would help allay the club’s financial woes.

The England international striker entered into negotiations with Japanese club Grampus Eight who were backed by car giants Toyota. Both parties had been engaged in talks for several months with Lineker keen to be a part of the new ‘Super League’ kicking off in the Far East the following season. Some newspapers reported that Tottenham were set to pocket £1 million from the deal with the striker to personally earn three times as much from the transfer.

The Japan Football Association (JFA) was seeking to raise the level of play domestically by forming a professional league that would both attract supporters and aid the fortunes of the national team. The J-League was formed in 1992 with its first season starting the following year. The club Grampus Eight was located in the city of Nagoya, the third most populous urban area in Japan. Toyota had previously been involved with a number of soccer teams playing under various guises before settling on the moniker of Grampus Eight. A move for the much-lauded former Barcelona player would signal the intent of both the club and the new league to compete internationally.

By the end of November 1991 a deal was confirmed by Tottenham with an agreed transfer fee of less than £1 million, though the club’s chief executive Terry Venables revealed that an unnamed Italian club was prepared to pay twice that sum for the-then England captain. It was hoped that the striker would draw a close on his international career with the European Championships in Sweden taking place in the summer of 1992. He had planned on retiring from football completely upon the conclusion of his Tottenham contract at the end of the 1992/93 season.

Of the move Linker commented “It is the adventure I’m going for. Sure, I’m going to make some money out of it, but that is a private matter. I won’t discuss it because I wouldn’t dream of asking anybody else what they earn.” It was believed that he would earn £2.3 million from the two-year contract, with the possibility of trebling that figure from the Japanese club’s promotional and commercial activities.

Although it looked as if the proposed transfer was in jeopardy when Lineker’s son George became ill with leukaemia, – which thankfully he would recover from – Lineker was poised to formally join Grampus Eight of Nagoya in February of 1993 as the club prepared to take part in the inaugural season of a 10-team J-League a month later. This was postponed by a further four weeks to allow Lineker to take part in World Cup qualifiers for England.

By June Lineker had scored one goal in five appearances for his new team leading him to comment that his main concern was to learn to speak Japanese so as to allow him to communicate better with his teammates. The team’s coach Ryuzo Hiraki and the majority of his teammates spoke English to aid the acclimatisation to his new environment.

Lineker confidently asserted: “I know the goals will come” though the mood soured further when his Nagoya side lost 3-1 to Gamba Osaka and dropped to penultimate place in the ten-team league. The English striker had recovered from injury to play in the game only to limp off with a damaged foot and miss another week of action.

Lineker’s transfer to the Far East would come under a different sort of scrutiny as Alan Sugar and Terry Venables clashed in the High Court in the battle for the control of Tottenham Hotspur. An affidavit from Sugar contained evidence related to the transfers of Lineker’s departure and Teddy Sheringham’s arrival at White Hart Lane from Nottingham Forest. Sugar’s sworn statement also detailed that the-then Forest manager Brian Clough liked a ‘bung’ to help deals go through smoothly (as told to him by Venables). Venables rebuked these allegations by stating ‘These allegations are unfounded. I find all of it bizarre.’ Sugar was hissed and jeered at by Spurs fans outside the court summing up a feeling of discontent at his stewardship of the club.

Although Lineker’s fortunes with Grampus Eight were flagging, he still proved an ample draw as Derry City sought to help raise funds for the club in a friendly to raise money to cover some of its substantial tax liability. By August 1994 there were reports that Lineker might join Bryan Robson’s Middlesbrough as they pushed for promotion to the Premier League. His contract was due to expire that December as Boro faced competition from Southampton who were trying to put together a deal to bring Lineker to the Dell financed by sponsorship from local firms.

Neither potential move came to fruition as the 33-year old announced in September 1994 that he was going to retire from playing upon the completion of his contract in Nagoya as originally planned. Though it would be a stretch to claim that Lineker’s time in Japan was a success, he was honoured at the J-League’s annual awards for his contribution, admittedly more for the publicity he brought than for his on-field contribution which yielded 9 goals in 23 games over his two seasons.

The first campaign saw Grampus Eight finish ninth in the ten team League while recording a healthy average attendance of 19,858 spectators. The following season was little better; another penultimate-placed finish, this time eleventh from twelve teams, though still the crowds turned out with a substantial rise in numbers recorded. 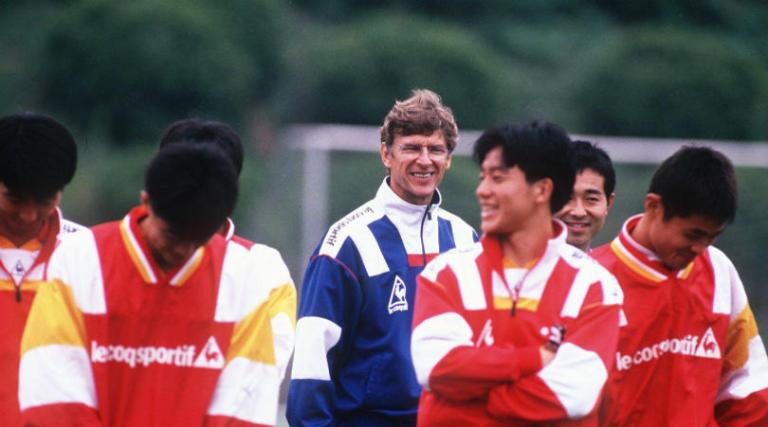 Grampus Eight’s fortunes did improve soon after under the managerial reign of Arsene Wenger who led the club to runners-up spot in the 1996 J-League, this following on from the previous successful campaign in the Emperor’s Cup. The up-and-coming Frenchman would of course go on to much further success with Arsenal in England. Although Wenger remains a key figure in the club’s storied history, it all began with the hopes of an ageing Spurs striker setting Nagoya alight. Perhaps the trajectory of both Lineker and Wenger’s careers within soccer may have foreshadowed things that were to come for North London football as much as forming a part of the development of professional football in Japan.